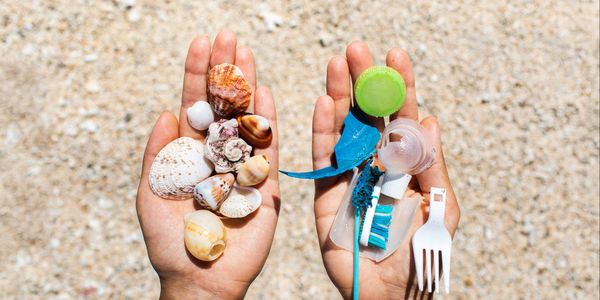 These Islands Are Covered in Plastic, and It's Killing Native Animals by the Thousands

To us, finding plastic waste on a beach might be unsightly, but for the cute hermit crab, it could be downright deadly.

This tragic fate is especially common in some of the world's most remote islands where ocean plastic washes up on shore with a shocking frequency. A recent study focusing on plastic pollution and its effects on hermit crabs took aim at two specific islands; the Australian territory of the Cocos (Keeling) Islands and the British territory of Henderson Island in the South Pacific.

Sign to demand clean up on the plastic infested islands of Cocos and Henderson.

Researchers wanted to find out how plastic debris affected hermit crab survival. They scoured four islands in the Cocos and Henderson Island for plastic bottles and other refuse that could serve as a tempting home for a crab. These bottles were often tilted with the spout upwards so that if a crab made its way into the bottle, it wouldn't be able to get out. In short, the plastic worked as a deathtrap. Their survey results were shocking. They found one to two dead crabs per square meter were being killed by plastic trash. Extrapolating their findings to the remaining islands, they estimate that more than half a million crabs had died in total on Cocos and Henderson together.

Experts worry that the slow massacre is likely to continue unless officials act. When hermit crabs die, they emit an odor that tells other crabs a shell is free for the taking. When a crab dies because it became stuck in a bottle, that odor will then attract more crabs and so on. In one case, researchers found more than 500 crabs in one container.

The death toll is as staggering as it is worrying. A half a million dead crabs are likely to have a severe impact on the local ecology. Hermit crabs play an invaluable role in their environment by dispersing seeds and aerating and fertilizing the soil.

These animals should not die because their island homes are being ruined with human trash that numbers in the millions. According to the study, there are 414 million pieces of plastic on the beaches of the Cocos, and 38 million more pieces litter the beaches of Henderson Island.

These small territories are part of two of the most powerful countries on Earth. They have a responsibility to take action to clean up their islands and make them habitable for the marine life that calls them home.

Please sign the petition and ask Australia and the United Kingdom to clean up their mess in the Cocos and on Henderson Island.
Sign Petition
SHAREShare With FriendsTWEETEMAILEMBED
Sign Petition
See more petitions:
You have JavaScript disabled. Without it, our site might not function properly.

Care2
These Islands Are Covered in Plastic, and It's Killing Native Animals by the Thousands
SHARETWEET