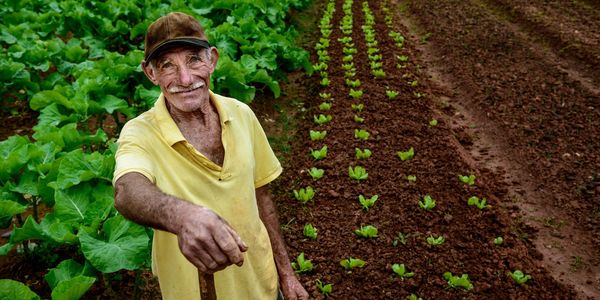 These workers harvest your food, but the United States is stealing their money

The H-2A program allows farms and other agricultural employers in the U.S. to employ people from other countries as 'temporary agricultural workers.' They fill myriad seasonal jobs like picking Florida's iconic oranges or digging up North Carolina sweet potatoes. It's demanding, strenuous work, and many workers are separated from their families during the months-long jobs. But it's usually worth it, since the program protects them from wage theft and affords them certain benefits like housing and transportation.

These employees are also called "guest workers." But under Trump, who loves to take a good thing and make it exploitative, the U.S. Department of Labor has made changes to this program that are far from the hospitable, thoughtful way you're supposed to treat a guest.

One such change is freezing workers' wages for two years, after which they'll be based on the average national pay for all workers WHICH IS WAY LOWER THAN FARM WAGES!

This greed at the expense of basic human rights is shameful. Sign the petition demanding that the U.S. Department of Labor reverses these ridiculous changes to the H-2A program!

It is literally the law that H-2A workers not undercut the wages of U.S. workers. They must be paid a fair, competitive wage based on a survey of all farmworkers in the United States; not just because they are human beings who deserve it, but because without these protections, employers would take advantage of cheap foreign labor thus making it harder for U.S. farmworkers to get jobs. The way these wages are surveyed and adjusted keep ALL workers' rights safe.

But some greedy farm executives are sick of having to pay these guest workers an honest, living wage. And we all know that while Trump campaigned on the idea of bolstered labor rights for the hourly and manual laborers, he has only ever given handouts to the rich 1% who actively exploit them. The first thing that tipped off labor activists and unions was when the Department of Labor called the surveying of farm workers wages to a halt. Without this survey, there is no way to calculate a fair wage; this was a huge red flag.

Next, the Department of Labor announced that H-2A workers' wages were going to be frozen for two whole years, unable to be adjusted for inflation or what changes the economy -- highly changing and unstable in the midst of a pandemic -- might undergo.

And finally, the Trump administration dealt its final blow to these hardworking people. After the two year wage freeze is over, their wages are going to be calculated based on a totally different wage database that has nothing to do with farmwork. This database's average wage tends to be lower and increases more slowly than that of specifically farmworkers. There is literally no reason to change the basis of guest workers' pay except to find an excuse to pay them less.

This is unacceptable! There is a shortage of farmworkers, even with the stronger protections for H-2A workers in place. These laborers make up 10% of the farming workforce -- paying them less for no good reason will result in millions of dollars in wage theft.

Sign the petition and demand that the U.S. Department of Labor take back these egregious violations of human rights. You pay for your food at the grocery store -- why shouldn't our government pay their fair share too?

Care2
These workers harvest your food, but the United States is stealing their money
SHARETWEET