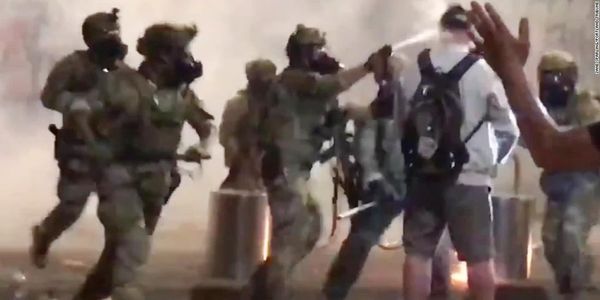 Peaceful people are being picked off the street by strangers, thrown into unmarked cars, and taken to unknown, inaccessible locations. The same masked, unidentified kidnappers are charging innocent folks without warning, shooting them with munitions, and spraying them with toxic chemicals. Sounds a lot like an open warzone, doesn't it?

Well, this is taking place in Portland, Oregon. The victims are American citizens, and the perpetrators are agents of their federal government.

Sign the petition today and demand that Congress withhold funding from the Department of Homeland Security until it halts this violence against the American people!

Under the guise of President Trump's order to protect federal property, namely racist monuments, the Department of Homeland Security has deployed agents from an array of agencies that are mostly unclear and undisclosed. But two of these agencies are Customs and Border Control and Immigration and Customs Enforcement (ICE) -- two institutions that are quite comfortable perpetrating violence against non-citizens, and that are also known for their unwaning devotion to Trump. Sending them into cities where they answer to no local authority and having them inflict terror onto its peaceful residents is a horrifying breach of civil rights.

These federal agents are walking around wearing full military and riot gear, with their faces and distinguishing features covered, and without their names or agencies displayed on their uniforms, as is customary and legally required usually to promote accountability and legality.

Many, many people in Portland have reported that they have been ambushed by men in camouflage, thrown into unmarked vehicles, held for hours, and then released without ever being told why they were taken or by whom. Even more have watched this happen while desperately trying to collect information on the person being kidnapped to reassure them that they will not be spirited away. One man, a Navy veteran, approached some of these agents to ask them how they felt about breaking their oath to uphold the Constitution. He was met with batons and pepper spray, and now requires surgery for his injuries.

And Portland is just the beginning. There are plans for a similar occupation in Chicago. Leaders of these cities recognize this as a threat to human rights, and have made it clear that the agencies are not welcome. But the secretary of the Department of Homeland Security himself has said that they "don't need invitations by the state" to come in and terrorize their cities. They are "going to do that whether they like us there or not."

Trump and his devoted followers are breaking the law and putting the American people in grave danger. These protests are peaceful, their participants begging for justice in the wake of George Floyd's murder and the newest wave of the Black Lives Matter Movement. Trump is the one who wants it to look like a fight so he has a campaign talking point that isn't his failure to save us from COVID-19.

Congress needs to step up before it's too late. The Homeland Security appropriations bill for next year has not yet been finalized or voted on in the House, and includes the department's budget. Demand that Congress make this financing conditional on the IMMEDIATE removal of federal agents and their violent tactics from U.S. cities!