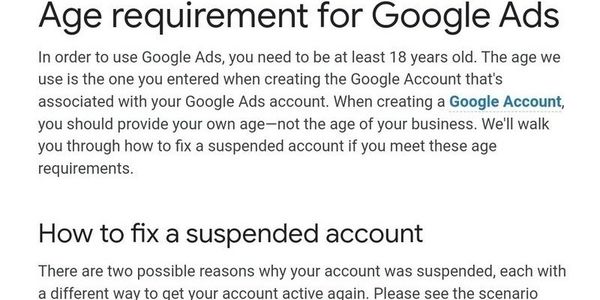 Last month, I set up a Google Ad to my campaign/petition to recycle the MV Wakashio ship rather than sinking it. I completed it, and I received multiple emails, some stating it needed to be finished and others saying it was live. When I came back to the Ads manager later, it just displayed a page that my Ads account was suspended due to age restrictions. It never stated any such restrictions anywhere during the setup or in the Ads terms. Despite that, it was displayed over 140,000 times, clicked more than 700 times, and we were charged around $618. It should NOT say my account is Suspended when it is not. It should either be truly suspended or it should not block access to the controls and lie* that it is suspended, which certainly warrants a refund. If I was not tricked into believing the lie*, I would have paused the ad much sooner, so I need to be refunded for charges after the first 2 days. I finally circumvented the notice and paused the ad for real. *It was just a glitch, but if they refuse a partial refund then they are embracing it and turning it into a lie.

I have been communicating with them for 8 days now, and they have yet to issue a refund. They said the clicks were legitimate, but that does not mean the Suspended notice was also legitimate, and the latter part is equally important unless Google’s wants matter more than their customer’s. They could have profited more by displaying a different ad, but there probably aren’t many ads on that topic to display anyway. If I am refunded, it would be the same for Google as an ad with no clicks per impression. Google doesn’t punish businesses that generate few clicks per impression just because Google could have displayed a more profitable ad in their place. My situation is the same. There was the deceptive Suspended statement I was lured into, and I shouldn’t be refused a refund because my ad would not have been profitable after a refund, and a more profitable ad could have been displayed.

Google has only offered an $100 credit, but I absolutely never intended to spend more than $75 on advertising anytime soon, to begin with. Suspended means there are no active charges. Saying that there were no charges accumulating, and actually charging $600, is money theft. Even if there was a full credit, I never intended to spend that much on advertising. If Google asks why I chose a plan with a cap more than $1,000 per month, it was because I wanted it to be advertised very quickly for a short time, and didn't want the advertising to be throttled based on an assumption it would be run for longer.

Our $600 is like 1/66 of a single cent for Google. We’re trying to balance our money. We want to make efficiency upgrades to our house and install renewable energy systems. I want to increase our positive action. Google, meanwhile, is sitting on $117,000,000,000 of cash reserves, enough to pay everyone in the world $16.71! They could build 69 dense full-size tables with all their cash glued together, assuming each bill is $100.

Please sign this petition if you support Google refunding the deceptive charges for “Suspended” ads. Thanks!
Sign Petition
SHAREShare this petition with friends!TWEETEMAILEMBED
Sign Petition
You have JavaScript disabled. Without it, our site might not function properly.