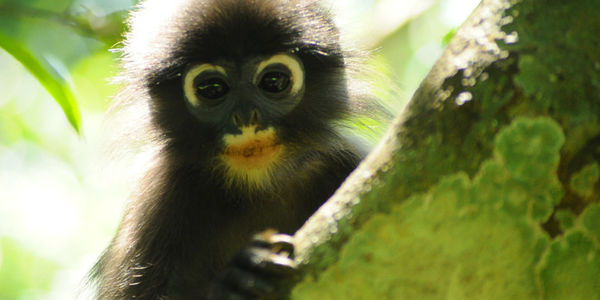 With fuzzy gray fur, long tails, and comical white rims around their large eyes and mouths, the Popa langur monkeys look like they could be the cutest addition to the Muppets family. But sadly, the future looks bleak for these newly-discovered primates.

Even their name seems like a dangerous omen of what could become of them. The monkeys are named after a volcano in central Myanmar where more than a third of their population lives. The cone of Mount Popa is considered sacred. But it's also extinct: a former-volcano, dead and powerless. Much like these monkeys soon could be.

Sign the petition to demand that international conservation organizations step up to help protect these monkeys!

Scientists only discovered the Popa langur recently, and by then, their population had already plummeted to only 200-260 remaining members. Historical evidence shows that, once upon a time, they lived all over the country of Myanmar, but most have perished. These days, they huddle in four disparate communities, with their numbers continuing to dwindle further and further.

The biggest threats to the Popa langur's existence all come back to one source: humans. Through our hunting, clear-cutting of forests, logging for timber and fuel, agricultural fields for livestock, and of course worsening climate change, we have been destroying these precious creatures' homes and cutting their lives short.

If we want the last few Popa langur to survive and for their species to flourish, rebound, and continue on into the future, then we need to make some changes now. And the best way to do that is by involving international wildlife authorities.

That's why we're calling on the International Union for Conservation of Nature (IUCN) and the Convention on International Trade in Endangered Species (CITES) to take action to help the critically endangered Popa langur. By updating their lists of threatened species to include these rare animals, they could help change the course of time.

Urge CITES and the IUCN to list the Popa langur as a threatened species and immediately begin to enforce protections for these endangered primates!
Sign Petition
SHAREShare With FriendsTWEETEMAILEMBED
Sign Petition
See more petitions:
You have JavaScript disabled. Without it, our site might not function properly.