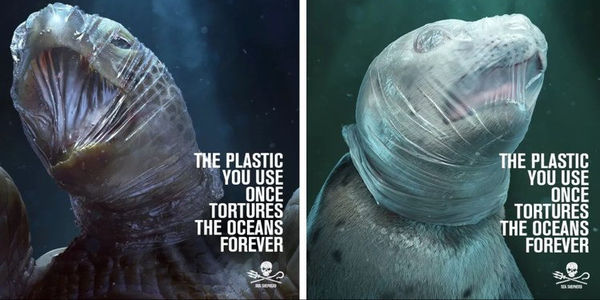 Cleaning up the Oceans’ plastic is essential to the future of the global ecosystem, as the repercussions of plastic pollution will hit hard soon, and are already affecting the food we eat and damaging one of the biggest ecosystems of our dear Mother earth; the only home we have.

Over 100, 000 marine animals die each year as a result of this problem and up to 80% of the pollution of the marine environment comes from land- from littering.
Plastic bags, balloons, glass bottles, shoes, packaging material – if not disposed of correctly, almost everything we throw away can reach the sea.

Plastic garbage, which decomposes very slowly, is often mistaken for food by marine animals. High concentrations of plastic material, particularly plastic bags, have been found blocking the breathing passages and stomachs of many marine species, including whales, dolphins, seals, puffins, and turtles. Plastic six-pack rings for drink bottles can also choke marine animals. This garbage can also come back to shore, where it pollutes beaches and other coastal habitats. Plastic also carries harmful pollutants like PCBs, DDT and PAH which are highly toxic and have a wide range of chronic effects, including endocrine disruption and cancer-causing mutations.These pollutants will be in the food chain, potentially effecting every living organism on the face of the Earth from humans to sea turtles to housecats, and with trillions of tons of the plastic in the Pacific Ocean alone coming from the 2000’s, the amount will exponentially increase with population as it has been for years.

WE URGE YOU TO SUPPORT AND HELP US BRING AN END TO OCEAN POLLUTION BY PLASTIC AND OTHER HARMFUL FORMS OF GARBAGE IN NAMIBIA, TO PROTECT OUR MARINE WILDLIFE, OUR BEAUTIFUL ENVIRONMENT AND THE WELL-BEING OF OUR POPULATION.

All plastic materials should be banned from the beaches on the coast of Namibia if it can not be banned in the entire country itself, and littering on or near the beach should be a crime punishable by a fine of a very large amount of money to prevent or solve this issue.

SIGN THIS PETITION TO HELP DO OUR PART AS A NATION AND SAVE THE PLANET!!!!!!!!
Sign Petition
SHAREShare this petition with friends!TWEETEMAILEMBED
Sign Petition
See more petitions:
You have JavaScript disabled. Without it, our site might not function properly.