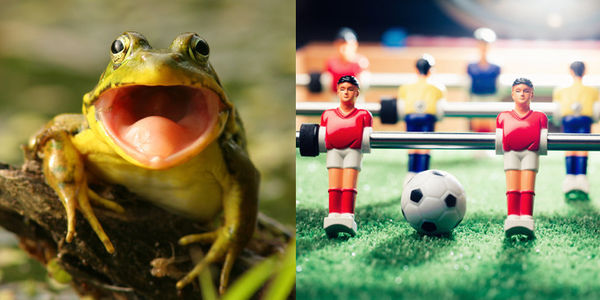 Desperate, scared frogs were trapped inside a foosball game and kicked around as live props.

Foosball is a simple, classic game that many of us have played. The set-up is pretty straightforward — players gather around a table that's meant to simulate a soccer field, with goals on either end and little player figurines attached to metal rods all along the table. To play, all you have to do is three things: drop a ball onto the table, grab hold of the metal rods, and "kick" the ball.

But recently, a group of kids in Singapore turned the tabletop into an arena for animal cruelty. Instead of using a plastic ball to kick around the table, the teens also pulled out an additional "toy" — a box filled with approximately one dozen frogs, all of whom were very much alive. They dumped the frogs out on the table. And proceeded to play.

Sign the petition to demand that authorities in Singapore commission appropriate mental health treatment for these teens in order to heal these abusive behaviors now!

The four teens filmed their game and published it online for all to see. In their footage, they proudly show off how they used their little figurine players to try and kick and hit the live frogs, which desperately try to hop away, despite being trapped inside a labyrinth of moving, dangerous pieces. In one scene, they specifically hit the plastic ball directly at one of the animals, causing the frog to smash against the table's side.

This continued until the group claimed they were down to their "last frog." What became of the others is not entirely clear, but we can at least be sure it's not a pretty story.

Singapore's Animal and Veterinary Service (AVS) is investigating the incident and taking this case of animal cruelty extremely seriously. We are grateful the authorities have been so quick to respond to this video. And we also want to make sure future incidents are prevented, by getting these kids the help they need.

While there's a popular saying that "kids can be cruel," such cruelty is actually extremely closely tied to children's own experiences and their mental health challenges. Obviously some of these children have had some troubling experiences, and we need to make sure they are given opportunities to heal before they go on to hurt more animals, or grow up to experience more pain and challenges.

Tell authorities in Singapore to provide these teens with mental health counseling and help them to heal and become compassionate young adults!
Sign Petition
SHAREShare this petition with friends!TWEETEMAILEMBED
Sign Petition
See more petitions:
You have JavaScript disabled. Without it, our site might not function properly.

Care2
Desperate, scared frogs were trapped inside a foosball game and kicked around as live props.
SHARETWEET