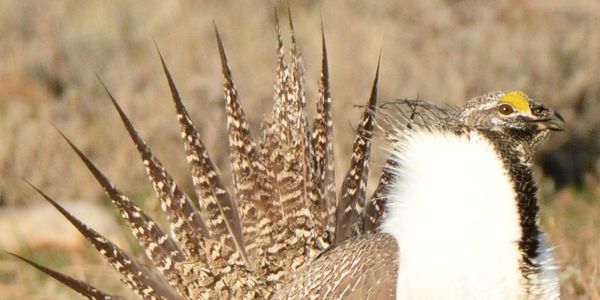 Please sign our petition to help convince the Bureau of Land Management (BLM) to reject the Alton Coal Mine Expansion Project Proposal. Being a sage-grouse conservationist, I am working to protect the Alton Sink Valley Lek, which is contained within the project area, but am also concerned with the many other issues surrounding the project. Alton’s proposal would destroy approximately 3,500 acres of Utah‘s public lands and would negatively impact the wildlife, air and water quality, local economies, and regional tourism. More than 200,000 individuals sent in comments but we believe that a petition would serve as a good supplement. The effectiveness of this petition lies in the numbers so we need all the support we can get. The BLM has not announced when they will be making a final decision but it could be anywhere from 7-8 months. We believe that May 31, 2016 would be an appropriate deadline for the petition, although it is subject to change if we get some news along the way. Please take a brief moment to sign the petition and please do spread the word. Thank you all for your support!

Details:
In November 2004, the BLM-Utah State Office received a Lease by Application (LBA) from Alton Coal Development to mine 2,683 acres of Federal coal on private and public land and recover approximately 49 million tons of Federal coal. Through tract delineation, the BLM increased the tract size to 3,581 acres. The LBA would expand mining operations to adjacent Federal coal lands, making it the first-ever strip mine in Utah. The tract is located in Kane County, Utah, approximately 0.10 mile south of the town of Alton and 2.9 miles east of U.S Route 89.

The greater sage-grouse is one of the many concerns of this project as the tract contains a lek: The Alton Sink Valley Lek. Given the precarious conservation status of the sage-grouse and the recent ESA (Endangered Species Act) non-listing decision, it is important to prevent sage-grouse habitat destruction wherever possible and this coal mine project, if approved, would destroy key sage-grouse habitat and drive the imperiled sage-grouse even closer to extinction. Despite the small population (estimated at 30-40 birds), it is important to consider that the loss of the Alton Sink Valley Lek would diminish the range of the greater sage-grouse as it is the southernmost active sage-grouse lek in North America and the sage-grouse till date have already experienced a loss of 56% from their historic range. Apart from the sage-grouse, the tract also contains a part of the Paunsaugunt mule deer migration corridor, a highly prized hunting location.

The Alton coal mine expansion project would discourage the millions of tourists who come to Southern Utah each year to visit places like Bryce Canyon National Park and Zion Canyon National Park, both of which are quite close in proximity to the coal mining project area. This could prove costly for our state economy, which generates 6.2 billion dollars each year from its tourism, with the five state national parks contributing most towards the revenue. Meanwhile, coal mining revenues pale in comparison, generating only about 200 million dollars each year.

Finally, the coal mine expansion proposal isn’t appropriate at this time as it comes during the coal industry’s collapse. In fact, the United States have announced to retire 200 coal plants since 2010, nearly 40 percent of the 523 coal plants that were in operation just five years ago. The reason for this crash is that the U.S is shifting towards natural gas for its electricity to reduce the country’s greenhouse gas emissions. This coal mine expansion project like any other would create a significant amount of particulate matter and air pollutants including nitrogen oxides, sulfur dioxide, and carbon monoxide. Needless to say, the Alton coal mine project would ruin the quality of life for the residents, and that too at the expense of the local economy. Alton has experienced a massive increase in its truck traffic and yet has not created any jobs for local residents. The truck driving jobs have gone out of state and all other jobs provided by the mine have gone to specialists. Furthermore, most mine employees aren’t even buying homes in the area. The new mine operation would run for 25 years, and would increase its daily traffic from 20 to 300 trucks. This would have adverse impacts upon the well-being of the local residents, who are already plagued by the traffic created by the mine. For all these reasons and many more, the BLM ought to choose the “No Action Alternative”, which would deny the tract for leasing.

Please reject the Alton Coal Mine Expansion Project Proposal. This project would have adverse impacts upon the wildlife as it would destroy key greater sage-grouse habitat at a time when sage-grouse protections are most needed. The Alton Sink Valley Lek is especially important, given it is the southernmost active sage-grouse lek in North America. The loss of this lek would thus diminish the range of the sage-grouse, which have already experienced a loss of 56% from their historic range. Approving this proposal would simply drive the imperiled sage-grouse even closer to extinction. This project would also discourage tourism, which generates 6.2 billion dollars annually for our state. This pales in comparison to the 200 million dollars generated by coal mining each year. Moreover, these revenues are expected to decline significantly as the coal industry has begun to collapse. Finally, the project would ruin the quality of life for the local residents as a result of the truck traffic and all the particulate matter/air pollutants created during the mining process. For all these reasons and many more, the BLM ought to choose the No Action Alternative.