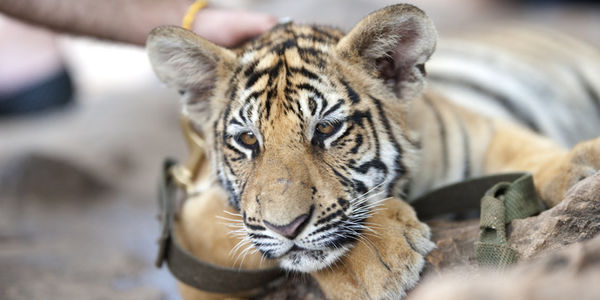 When Texas residents were enduring their bitter cold spell earlier this year that left dozens of people dead, authorities discovered disturbing examples of animals suffering through the freezing cold, too. One such case in San Antonio was particularly upsetting.

Police arrived at a couple's home to find a baby tiger, just six months old, who'd been purchased as though she were a fun play item or a pet (which is illegal in San Antonio). Then, the people had locked the poor wild creature up outside despite the chilling temperatures. The tiger was also suffering from the early stages of malnutrition and starvation because her humans were not properly taking care of her.

Tigers should never have to endure this type of torment. These precious wild animals need to remain free to be with their cat families — not torn away from their communities, bought and sold, and then chained up in lonely, often painful captivity. Sign the petition if you agree!

Local rescuers nicknamed this young tigress "Elsa," and luckily she's now been moved to a sanctuary known as the Cleveland Amory Black Beauty Ranch. But she's not the only one to endure this type of fate. All sorts of big cats that should be wild — including tigers, lions, cheetahs, leopards, cougars, jaguars, and more — have been forced into lives of inappropriate confinement by humans who think it's funny or cute to own these animals as "pets."

There's a reason this type of mistreatment keeps happening. Even though specific cities and regions have done the right thing and prohibited big cat ownership, it's still legal in many parts of the country, so it's still pretty easy for people to get their hands on baby lions or adult cheetahs if they really want to. There's only one way to fix this patchwork system: the United States Congress must pass a federal law such as the Big Cat Safety Act to protect these animals and ban keeping them as pets.

Keeping these big wild animals as pets isn't just bad for the cats — it's also bad for humans. Official reports show that hundreds of children and adults have been injured, maimed, or even killed due to these attempts at turning big wild cats into cute domesticated pets.

Let's keep animals AND people safe. Sign the petition and urge the U.S. Congress to pass the Big Cat Safety Act and ban big cat ownership now!
Sign Petition
SHAREShare this petition with friends!TWEETEMAILEMBED
Sign Petition
See more petitions:
You have JavaScript disabled. Without it, our site might not function properly.