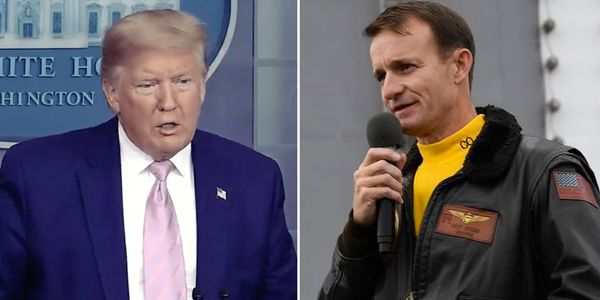 Reinstate the captain the Trump administration fired for trying to save his crew from the pandemic! He's a hero!

Captain Brett Crozier was fired from his command on the USS Theodore Roosevelt for fighting to save the lives of his 4,000 crewmembers because it embarrassed the Trump administration, which was willing to let them die.

It really is as simple as that. When Crozier's letter asking for the coronavirus-infested ship to be evacuated was made public it exposed the Trump regime's deadly ineptitude, and they didn't like it.  Trump's Navy Secretary, Thomas Modly — a man who only has his job because he was ok with Trump pardoning a war criminal — admitted as much.

"I think he put the spotlight on the Navy in a negative light when all the things he was asking for we're surging for him," Modly said in a stunningly candid defense of his indefensible firing of Crozier. "I just can't have a commanding officer who gets overwhelmed and uses that type of judgment in the middle of a crisis."

Most alarmingly, while Modly was quick to fire the hero captain, he continues to drag his feet, as the Navy has only met 67% of his own scheduled evacuation target, in that it said 2,700 sailors would be sent ashore by April 4, and only 1,825 had actually been moved by that date.

In other words, the Navy literally validated the exact complaints from Captain Crozier that they weren't moving swiftly enough in the face of the outbreak. It's time for leadership that focuses on results, not excuses and retribution.

Add your name to demand the Trump regime reinstate Captain Crozier at once!

Care2
Reinstate the captain the Trump administration fired for trying to save his crew from the pandemic! He's a hero!
SHARETWEET