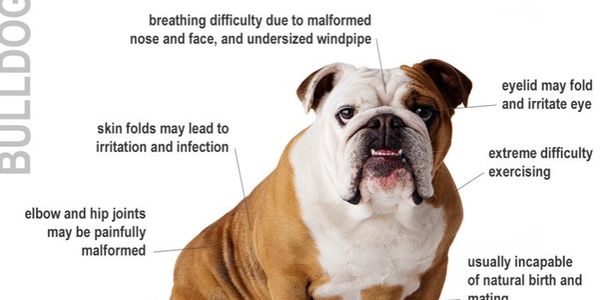 Hello 👋,
English bulldogs, French bulldogs and pugs are what is known as brachycephalic dogs. They have been bred to have such short muzzles that they suffer from breathing problems. English bulldogs, while being iconic to Britain 🇬🇧, are walking embodiments of unhealthiness in dogs. They suffer from everything from breathing problems like elongated soft palates and stenotic nares, skin problems, temperature regulation issues, bone and joint diseases, eye problems like cherry eye, head shakes, allergies and thyroid and heart diseases. In fact, while some other dogs can live for 15-20+ years, some bulldogs only live to eight. This is all because we humans have bred them to look how we want them to look, without regard to their health. Because of our breeding to our standards, these poor dogs suffer. Years ago, we may not have known that our breeding these dogs like that would cause them to suffer, but even now that we do know that it causes them suffering, we still do it. This is selfish, unethical and cruel. Some people love bulldogs, but no matter how much you love dogs, breeding them is not justified, if it causes them suffering or is otherwise unethical. Unethical breeders are breeding these dogs and selling them for hundreds of pounds, despite knowing full well that the dogs suffer due to the breeding, and that there are millions/billions of dogs in need of homes in shelters, rescues, living rough and in other people's homes. French bulldogs and pugs also suffer terribly from the breeding. They also suffer quite badly with breathing problems...
Some may claim to be ethical breeders, but unless they are serious, well-learned breeders with vast amounts of knowledge and experience with their breeds and they breed mainly to improve the health of the breed, none of them can truly be considered ethical breeders, especially when it comes to breeding brachycephalic dogs, or any dogs whilst there are so many unwanted dogs in this world.
The Dutch Kennel Club has already banned new registrations of English bulldogs. There are concerns that this may lead to more underground breeding of these dogs with worse conditions. If a law/rule like this were to be introduced in the UK, it would need to properly enforced and impose strict penalties both for breaking the rules by breeding English bulldogs and for cruelty and neglect with underground breeding and importation, if that is found to be the case.
Please join Holland/the Netherlands and ban all breeding and new registrations of English bulldogs, French bulldogs and pugs, except that which is done more responsibly* and mainly for the health of the dogs. Please crackdown on irresponsible breeding and breeding for money, especially of brachycephalic dogs.
Thank you 😊.