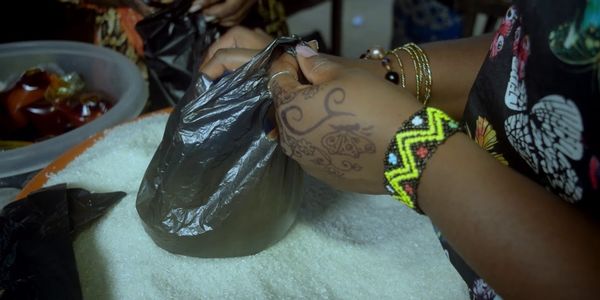 160,000 plastic bags are used globally every second! 5 trillion plastic bags are produced yearly! 1,000,000 plastic bottles are bought around the world every minute. And these plastic products are produced using petroleum, natural gas and other chemicals. Its production is toxic to the environment. Plastic will only start degrading after 700 years and will only fully degrade in 1000 years. This means that all the plastic that has ever been produced has not degraded yet. Plastic products remain toxic even after they break down. They don't biodegrade, they photo-degrade. It means that after they degrade, they break down into smaller and smaller toxic bits of themselves – and bleed and contaminate the environment.

In May 2018, Prince Nhyira Sultan Gyimah, a save the planet activist said that "the next generation will be threatened with something more serious than the atom bomb" unless a "total ban on plastic is put in place".

The efforts of governments and retailers will go to waste if we, the consumers, don't contribute to the effort of reducing plastic usage. Countries, states, large cities and small towns all around the world have banned disposable plastic shopping bags and many other single use plastic products to protect the environment. In Canada, the town of Leaf Rapids, Manitoba banned plastic bags in 2007. Other North American cities include San Francisco (also 2007), Seattle, Los Angeles, Portland and Mexico City. The states of Hawaii and North Carolina have banned plastic bags, and states in Australia and India have done the same. Countries that have banned disposable plastic bags include Italy, China, Bangladesh, many countries in Africa including Rwanda, Ghana, Kenya, the Congo, and South Africa.
It remains ineffective in most parts, as there is widespread availability of and demand for polythene bags. Yes, you've been so used to it. It's cheap and convenient to carry things in plastic bags or drink beverages using plastic straws or even to buy a packet of chips at the supermarket. But have you ever stopped and wondered what happens after your use these items? That Coca cola or Fresh Up bottle you just drank from, what happens to it? This is what: It is simply thrown away into the sea or any where in the environment and left there just to sit.
Approximately 24,000 tonnes of plastic waste is generated by Sierra Leone daily, and it is only increasing every day! Moreover lots of our waste is ending up in rivers, lakes, oceans, roads and even in the stomachs of many animals! About 1,000,000 seabirds and 100,000 marine mammals die each year globally from ingesting plastic or by getting tangled in nylon fishing line, nets, six-pack plastic can holders, and plastic rope, according to estimates. By 2050 there will be more plastic items in our oceans, than fish. This is due to the poor waste disposable methods we are using; they may be improving, but at too slow a pace...
Recycling could be a solution, but why generate plastic waste in the first place! WHY CREATE A PROBLEM AND THEN SPEND OUR TIME, ENERGY AND BILLIONS OF DOLLARS SOLVING IT!

Let's ask our government to BAN THE USE OF ALL SINGLE USE PLASTIC.Together lets eliminate this horrific practice. Please I would urge you to sign and share this petition to create a better future; not just for us humans but also the many plants and animals we share this planet with.