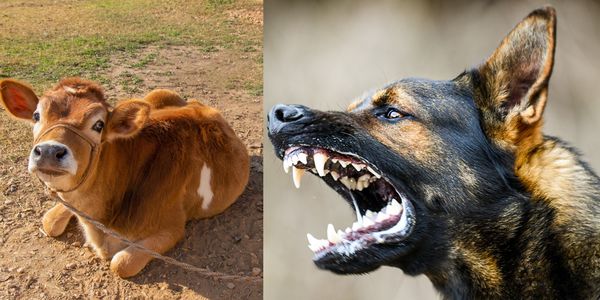 Dogs are normally benevolent, protective presences on farms -- from herding sheep and cattle to keep them safe and fed, to standing guard at night and warding off predators, all the way to playing with the animals as unlikely friends, they bring joy and safety.

But an unknown number of men in Spain have spoiled that precious role, and taken to training their dogs, most likely through violent and abusive methods, to attack, maim, and possibly even kill an innocent pig, a helpless cow, and who knows how many others.

Sign the petition and ask the Spanish authorities in the Galicia region of Spain to find and stop these merciless culprits, and rescue their dogs who will need intense rehabilitation.

The cruelty was discovered not in some dark corner, but because the perpetrators proudly published videos of it -- they circulated footage of the violence on WhatsApp. In one video, three dogs are seen circling and attacking a lone cow that is tied up, unable to run or turn to defend itself. Animal welfare organizations described the cow's suffering as "immense." In a second video, one dog is filmed as it attacks a pig. A voice from behind the camera tells the tortured animal to "keep going."

As sickening as that is to hear, it actually gave authorities a huge clue -- the man's dialect allowed them to narrow the area down to Galicia. They must use this tip and exhaust all of their resources to find the person behind the voice before more animals are hurt!

That poor cow and pig are not the only animals suffering because of the whole ordeal -- there is no way of telling how many other animals have been subjected to this torture. Plus, the dogs in the videos are victims too -- violence and aggression exhibited by dogs is almost always a sign of fear, reinforced, no doubt, through other abuses performed off screen. These poor dogs deserve a chance at a new life, free from pain or fear, where they can readapt to a world where no one wants to hurt them.

We cannot waste another instant while these dogs are at these people's mercy, along with whatever farm animal they are able to get their hands on. Please sign the petition if you want the Spanish authorities in Galicia to not rest until the makers of these recordings are found!