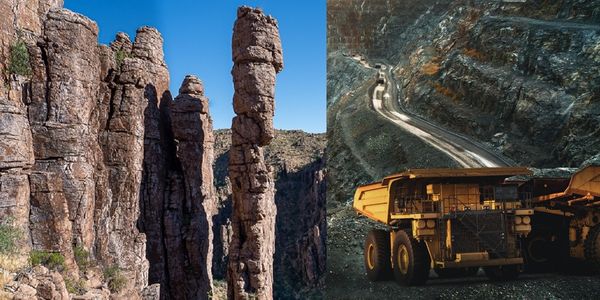 Oak Flat — a 4,300 acre area located just east of what is now known as Phoenix, Arizona — is a sacred site to many Native American tribes, including the Apache, Zuni, Yavapai, O'odham, and Hopi. An ancient location that carries deep significance and meaning, it's where the Apache tribe holds traditional ceremonies, communicates with the spirits of the land, harvests healing herbs, and welcomes young Native Americans into adulthood.

In fact, the site is so ancient, petroglyphs and other prehistoric rock paintings have been discovered there. Covered in rocky formations and mountains, as well as saguaro cacti, yucca, and cedar trees, it's also a breathtakingly beautiful sight to behold.

Now, mining companies want to ruin it all.

Sign the petition to demand the Biden administration take action to protect Oak Flat from mining destruction and restore it to Native American control now!

Oak Flat is also home to a huge supply of copper ore, and as we all know, greedy natural resource corporations only see dollar signs when faced with a "possibility" like this. They don't care about environmental destruction, wildlife and plant life, ecosystems — or Native Americans' rights to religious liberty and their own history.

The Apache tribe was removed from their land, including the holy grounds of Oak Flat, in 1852 after the U.S. government promised in the Treaty of Santa Fe to compensate the tribe and pass laws enhancing the tribe's "prosperity and happiness." Naturally, the federal government never honored this treaty — other than to rip away the land.

The betrayal got even worse in 2014, when Senator John McCain gave away 2,400 acres of Oak Flat to a copper mining company. That company, Resolution Copper, wants to alter the landscape so badly, it would "destroy the site forever," in the tribes' words. To conduct their mining operations, they would create a huge 1,100-foot-deep, almost 2-miles-wide crater right in the heart of this sacred spiritual place. This is blasphemy, and we can't let it happen.

As Wendsler Nosie, former chairperson for the San Carlos Apache Tribe, says: "All we're trying to do is go to our home. Where we are from. Where we originated, and Oak Flats is that place."

Various U.S. politicians talk a big game about supposedly caring so much about religious liberty. Let's see them put their money where their mouths are, and honor Native Americans' spiritual heritage.

Tell President Joe Biden and the U.S. Congress to pass laws fully protecting the sanctity of Oak Flat and return its authority to the Apache peoples!
Sign Petition
SHAREShare With FriendsTWEETEMAILEMBED
Sign Petition
See more petitions:
You have JavaScript disabled. Without it, our site might not function properly.