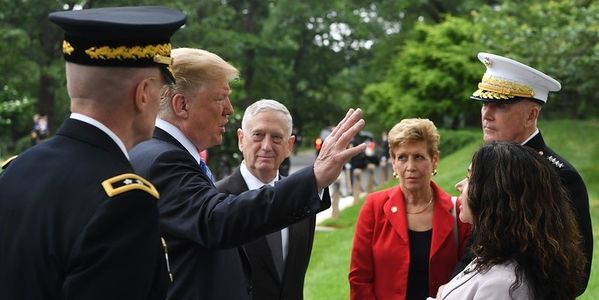 Trump thinks that members of our military are "losers" and "suckers;" Biden respects them

It's no secret that Trump has zero concern for basically any life other than his own. But it is with particular contempt, disrespect, and malice that he treats military members, both past and present.

Here are just a few of the hateful things Trump has set about active, veteran, and deceased military members:

Trump has mocked, scorned, and disregarded people at every level of the military. He is completely unfit to serve as Commander in Chief -- before he became president, he cowardly fabricated a medical ailment in order to get out of military service in Vietnam. Why should he hold the position of President of the United States, head of the army, navy, according to the constitution the "supreme military commander charged with the responsibility of protecting and defending the United States?"

Joe Biden, a proud father of a fallen veteran, has always shown the greatest reverence for those who choose to serve. He also plans to launch the Obama-era Joining Forces, a program that offers comprehensive education, tools, and resources to military members and their families throughout their lives.

Sign the petition and pledge to vote for Joe Biden, a leader that would honor, respect, and support the military in his position as president!

Care2
Trump thinks that members of our military are "losers" and "suckers;" Biden respects them
SHARETWEET