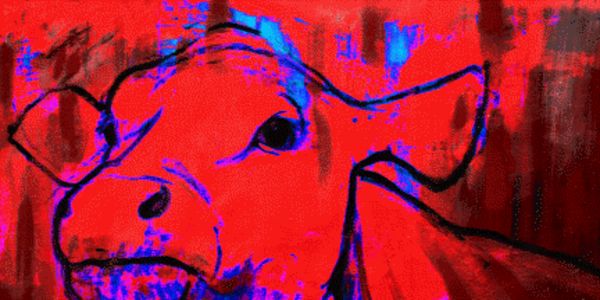 BAN THAT KILLING OF PREGNANT COWS AND THEIR CALVES

Dairy cows are the hardest worked farm animals and mothers. The only reason they produce milk is to feed their calves; but we taketheir milk away and deprive their calves of the love and affection, security that is their right as living, breathing creatures. They suffer abuse, neglect, illness. Separated from all the calves they give birth to. Dairy cows living for up to 25 years. But because of their hard lives, they are worn out by 4 or 5 years old. They will be sent to slaughter, where many cannot even stand up anymore. And there they get a new name: DOWNERS.

They are filled with fear, as they smell the blood of others who have had their throats cut, and struggle to escape when they hear the cries of the other cows. An absolute gruelling life and gruelling death, all inhumane and cruel.

Animals from all over the world end up here. Sheep and cattle are exported live from countries in the European Union such as France, the Czech Republic and Spain (where they have legal protection). Investigations Unit visited Beirut Public Slaughterhouse, and what they found was unimaginable!

"The slaughterhouse is chaos. Everything is coated in a layer of blood, faeces and body parts. The slaughter area is heaving with people, live animals and slaughtered bodies. The sounds and smells are overwhelming.

Cows are left suspended fully-conscious by one leg for long periods of time, their faces resting in pools of other animals' blood. watch animals being slaughtered all around them Treated as mere milk-producing machines, cows exploited and abused for their milk endure lives of near constant misery and deprivation."

" A cow had given birth to a beautiful male calf...On the second day after birth, a man took the calf from the mother and placed him in the veal pen in the barn—only ten yards away, in plain view of his mother. The mother cow could see her infant, smell him, hear him, but could not touch him, comfort him, or nurse him. The heartrending bellows that she poured forth—minute after minute, hour after hour, for five long days—were excruciating to listen to."
A UK survey in the 1990s at one slaughterhouse found that, "of the slaughtered cows, 23.5 per cent were pregnant and 26.9 per cent of these were in the third trimester." 23 percent were pregnant.
What Happens to the Calves in Slaughterhouses?
While workers stun the mother-cows, hang them upside down, cut open their throats to let the blood from their body drain out, cut off their legs, and pull off their skin, all that time, there is a calf inside them, fighting and dying a horrifying death. How soon in the process the calf inside dies likely varies according to how developed he or she was and how fast the slaughter process moves. The calf could still be dying, dying but still living, still suffering terribly--at the time of her mother's dismemberment and disembowelment.
The tragedy doesn´t end here: In addition to the trauma of still being alive inside their mothers during the latter's death, fetal calves may also be cut from their mother's womb while still alive, so that their blood can be drained for use - without anesthesia.
"After slaughter and bleeding of the cow at an abattoir, the mother's uterus containing the calf fetus is removed during the evisceration process (removal of the mother's internal organs) and transferred to the blood collection room. A needle is then inserted between the fetus's ribs directly into its heart and the blood is vacuumed into a sterile collection bag. This process is aimed at minimizing the risk of contamination of the serum with micro-organisms from the fetus and its environment. Only fetuses over the age of three months are used otherwise the heart is considered too small to puncture.

The heart of the bovine fetus is functioning during the bleeding process via cardiac puncture. The fetal heart must be beating in order to obtain an adequate harvest of fetalbovine serum (FBS) production by means of cardiac puncture. Blood coagulates immediately upon death.

"For all practical purposes, a fetal calf's heart must be beating to obtain an adequate harvest for fetal calf serum production."

The fact that the fetal heart is functioning during the cardiac puncture, indicates the fetus is still alive then and therefore may experience pain because of the needle inserted into its heart, and because of terminal bleeding. As the fetus is never anaesthetised or stunned prior to the performance of a cardiac puncture for FBS harvest, it can be stated that FBS harvest by means of the method described above, represents an ethical problem.

Notice in the background that the mother cow is still periodically kicking while bleeding out, as the calf who was brutally cut from her womb and laid out on the floor just feet away struggles and cries out for his mother. Notice how their blood--so much blood--pools together after his throat is slit too, as they die horrific deaths together, both mother and baby helpless witness to the other's suffering and violent death (thank you to all those, who shared their thoughts, music, pictures with me to be able to create this petition!)

Stop Animal Cruelty Mothers, Not Machines: The Misery Behind Milk http://suprememastertv.com/bbs/board.php?bo_table=Stop_Cruelty&wr_id=42&goto_url=&page=1 via @ http://twitter.com/sumemastertv  ;

hoping for You did watch those videos, heard the music of two musicians dedicated their lifes for animals´ care You ecperienced the pain of pregnant mother cows transported to slaughterhouses. And there the nightmare grows, undefinitely.

She is hearing the cries of her unborn, only cut off, baby-calf, smelling the fear, the panic - all this mixed with her own destruction.

Please, act, however You can do, to make an end to this torture, happening in chronical acts of animal abuse.

We have laws, we trust them, for our suffering animal-friens, too.

Thank You for Your patience:

With the heart-beat of animals:

Care2
BAN THAT KILLING OF PREGNANT COWS AND THEIR CALVES
SHARETWEET