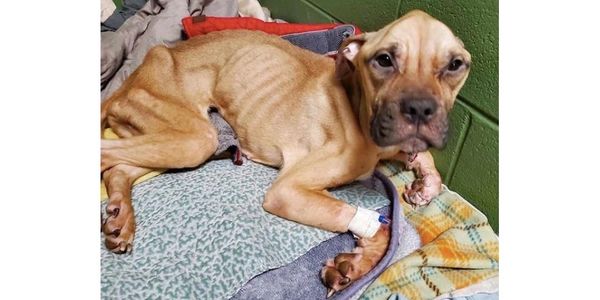 Ru the dog was found emaciated, freezing to death, and wrapped in a urine-soaked blanket

At first glance, Arugula's wrinkly little face and puppy dog eyes look like any other sweet pup's. But look beyond, under the blanket she's wrapped in, and you'll find one of the skinniest, sickest dogs imaginable.

Tell the City of Chicago to allot more funds to animals in need, like sweet Arugula!

The dog, affectionately nicknamed Ru, was found in the middle of the harsh Chicago winter -- starved to half her normal body weight, unable to stand, and wrapped in a urine-soaked blanket. Even now, she is struggling to survive, bouncing between her loving foster home and the emergency vet due to countless complications resulting from the horrific abuse and neglect she endured. The process of refeeding her -- or teaching her body to safely eat again after such extreme starvation -- has been tricky, she's had to undergo painful surgeries to remove toys and rope from her GI system, and her weakened state has left her at risk for myriad other conditions and complications.

On top of that, there are countless possible underlying conditions she could be suffering from, but veterinarians aren't sure yet because they are hard to spot in a dog so neglected and weak. She has been through so much, and already the rescue that took her in -- One Tail at a Time -- has paid over $21,000 in vet bills.

The City of Chicago had a budget of $11.6 billion in 2020, and only around $7 million went to Chicago Animal Care and Control. It's the only city-funded pound, and it is disproportionately supported by animal shelters and charities. These organizations pull out dogs in need and foot the cost of food, care, shelter, and medical attention themselves through mainly donations. It's incredibly important, lifesaving work, so why isn't it built into the city's massive budget? (Overfunding the police, maybe? Or yearly pension increases for the city government's top 1%? We digress...)

While Ru is an especially horrific case and absolutely involves abuse, she is just one of thousands of dogs, cats, and other pets that will be abandoned, harmed, or surrendered in Chicago this year. The city has a responsibility to these animals, as well as the people who advocate for their welfare through donating their own time, resources, and money helping these sweet creatures.

Sign the petition asking for Chicago to increase funding for vulnerable animals in the shelter system!

If you are able, please also consider clicking here to donate to One Tail at a Time as they support Ru through her arduous recovery.
Sign Petition
SHAREShare this petition with friends!TWEETEMAILEMBED
Sign Petition
See more petitions:
You have JavaScript disabled. Without it, our site might not function properly.

Care2
Ru the dog was found emaciated, freezing to death, and wrapped in a urine-soaked blanket
SHARETWEET