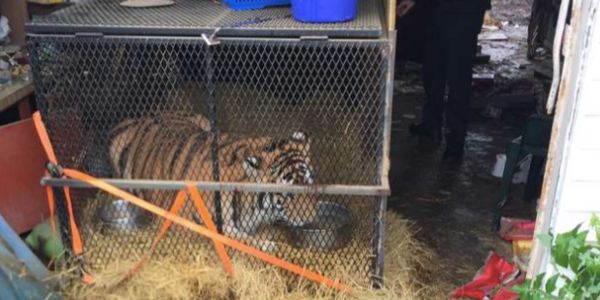 In Texas Anyone Can Own a Tiger, Gorilla or Orangutan. This Must End.

Last week, a Houston man decided to break into an abandoned house so he could have a little privacy to smoke some weed. But before he took his first puff he was already tripping. There, right before his eyes, he saw something he couldn't believe — a young male tiger.
Luckily for the unnamed smoker, the tiger was in a cage so he wasn't in any immediate danger. On the other hand, the situation didn't look so good for the tiger itself. When rescuers arrived, they saw that the tiger was in an enclosure much too small for his size, and the room wreaked of ammonia from the animal's waste and he was thirsty. Other than that he looked to be in good shape.

Of course, the real question is what is a tiger — native to Asia — doing in the middle of Texas in the first place? The answer may shock you, while it is illegal to own a Tiger in Houston, it isn't illegal in the state of Texas. In fact, according to some estimates, Texas has the second highest tiger population in the world - after the entire nation of India. In the Lone Star state, any Tom, Dick or Mary can fill out a few papers, comply with minimum standards of care and safety and walk away with a certificate of registration that allows them to keep a tiger as a pet — one that will live an unfulfilling life.

And it's not just tigers. Unbelievably, according to Texas's dangerous animal registration laws, any registered person can own lions, tigers, bobcats, bears, coyotes, hyenas, jackals, leopards, cheetahs, cougars, ocelots, jaguars, lynxes, servals, caracals, baboons, chimpanzees, orangutans and gorillas. That's right, someone can have a gorilla in their backyard!

Wild animal ownership isn't just cruel, it puts the lives of both the animal and the people at risk. There are countless stories of big cats that have escaped their enclosure and killed innocent bystanders or ones that have had to be put down by law enforcement once they are on the loose.

The state of Texas is being negligent by allowing ordinary citizens the opportunity to own dangerous animals. And they will be responsible for the deaths of innocent bystanders or the helpless animals themselves.

It's time to end wild animal ownership in Texas. Please sign the petition and demand that the state ban this practice today.

Care2
In Texas Anyone Can Own a Tiger, Gorilla or Orangutan. This Must End.
SHARETWEET