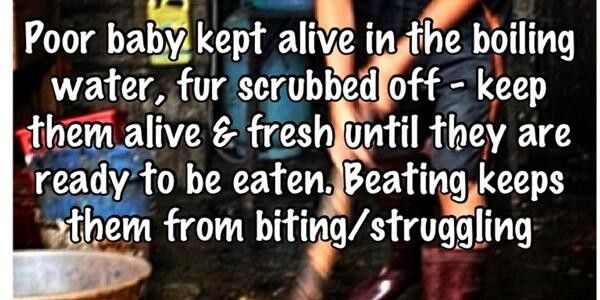 In S.E Asia, they are still boiling alive, cats and dogs. UN Secretary - General Ban Ki Moon states "We must not fail the billions who look to the international community to fulfill the promise of the Millennium Declaration for a better world."

A better world? - To create this, stop Chinese and Koreans from deliberatly torturing animals for Dog Torture Soup! The torture for satisfaction, food and money. It is all on the black market. That is very very very bad.

The Koreans love Dog Torture Soup. Dog torture soup does not belong in a world that recognizes the UN Millennium Goals. Dog torture soup was developed 2,000 years ago by a sick society based in fear, bitterness, anger and resentment. The old resentment is so ingrained now, and projected onto the dogs. We have all seen the photos of dogs boiling alive.

Dogs and cats DO NOT DESERVE the heinous crime of such a painful death. I have burnt myself with boiling water and it REALLY HURTS. Imagine being being boiled alive!!

I have spoken to young Koreans who say, that "yes, the dogs should be killed with EXTRA PAIN because it makes the meat taste better." These people need education. There is a sickness, in your society. Until you fix it, you will fail in the UN Millennium goals of real education.

Please work with UNESCO to educate young Koreans and young Chinese, that torturing animals for tasty and tender flesh, is barbaric and does not belong in the Millennium Development goals of an educated society.

These people are still blaming dogs, projecting their hate and anger, onto dogs. This is a mindset from 2,000 years ago when someone said dogs were sinners and deserved to be punished. Get real. Please.

Koreans and Chinese are still boiling alive 20 million cats and dogs a year. If we are in the era of the United Nations UNESCO Education, Science, Culture then, education and science will tell you that animals feel pain like we feel, therefore the culture of torture, is wrong.

If the UN still allows this torture to and under the "Culture" Banner of UNESCO, it is as to say that culture=torture=culture=torture, just as bullfighting is legal and part of culture in some countries in Europe. We can't let this go on for the next 2,000 years?

Another billion dogs (and cats, pigs, and chickens too) could be boiled alive.

Hundreds of thousands of people around the world are horrified at the boiling alive culture of China and Korea.

Yet the UN has not even considered humane welfare and slaughter, for animals of trade, as part of its Millennium Education. Well, torture does not belong in an educated society.

UNESCO needs to do the right thing and start to educate the people, that the culture of torture does not belong in the New Millennium.