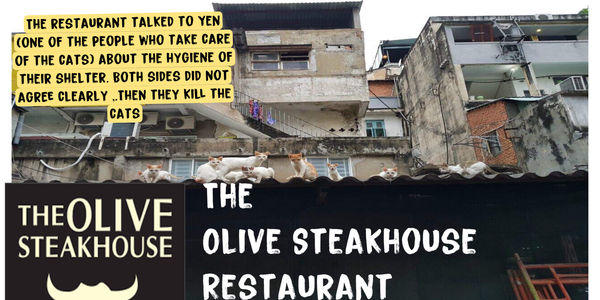 Until one day 2 months ago, a couple, who are also the owner of The Olive Steak House restaurant (2nd floor, apartment 151 Dong Khoi) moved in and started a business. They did not have any sympathy for the feral cats. They secretly threw away all the food that the residents and I had put out for the cats. Then they had done one unethical thing to the extreme, THEY HAD POISONED KILLED ALMOST 20 CATS. I was shocked when I heard the words from the wife's mouth as follows: "You have to let them starve to make them die, if you feed them they will keeps living", "all of the food you gave them, I threw it all away", "if you continue to feed them and every time you feed them, I will kill a cat and will leave it in front of your place."

The residents of the apartment and I negotiated with them to give us a little time to contact rescue organizations, even accepted to hire someone to clean up the cat's waste to avoid affecting their business. However, THEY HAVE SECRETLY BATE POISONED THE POOR CATS IN THE MIDDLE OF THE NIGHT. The morning after that night, I saw the cat's bodies lying everywhere, I absolutely couldn't describe my feelings of regret, anger and helplessness at the time. The cats have died ranging from full-grown to baby kittens. Some are pregnant, and some are still breastfeeding. Decomposing cat carcasses stinks everywhere, causing heavy pollution.

The whole apartment complex loves cats and no one is bothered by them. The leader, who is also the manager of the apartment building, confirmed: "In this apartment building, it is not allowed to kill or bait cats, they can only be relocated, fostered or adopted." WHY IS THIS WIFE AND HUSBAND TOOK SUCH INHUMANE ACTIONS TO THE POOR CATS??? They are just tenants, not the owner of the apartment complex. More over, they are not in the management board of the complex. What rights do they have to kill the cats. Not to mention, since the cats are gone, rats have started raging again, causing households and business households to be severely affected.

After being poisoned, the lucky ones that were still alive were taken to the emergency veterinary in time, but most of them died painfully.
I cried a lot when I thought about those innocent kittens. My anger and the feeling of helplessness couldn't be put into words. However much pain I feel for the poor kittens is how much resentment and anger I have towards the wife and husband.
I pray that all the poor kittens will Rest In Peace in Heaven and will get to reborn into a better life.
We will get justice for all the killed cats.

I LOVE ALL OF YOU GUYS UNCONDITIONALLY AND FOREVER