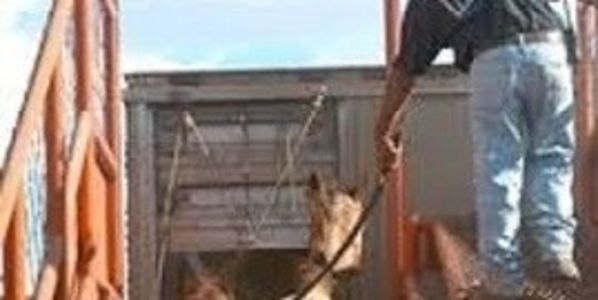 The purpose and intent of this petition is to ask that the Horse Transportation Safety Act of 2015 be passed.

The petition included a HSUS press release from June 28, 2011 to provide signers of the petition with an overview of a part of the Bill's history. The text of the earlier Bill reinforces the dire necessity for the passage of the Horse Transportation Act of 2015 (H. R. 1282).

Is there some chance that our horses are still being transported to slaughter, to a destination removed from a slaughter house, in double-decker trailers in violation of or not covered by the USDA's ban?  I recently spoke with a woman with APHIS. She said that there was no way that one could definitively say that people were not trying to circumvent the ban and the regulations. It is not unimaginable that given the underhandedness and stealth of kill buyers that they are using these vehicles, unloading the horses and loading them again into smaller trailers before they reach a port of entry. The 2015 Bill would prohibit the transport of ALL horses in DDTT, thus making it impossible for the KB to use these vehicles.

In the horrific accident involving 59 Belgian draft horses that occurred in 2007, eight were killed, 10 were euthanized as result of their injuries. At the time the sheriff said, contrary to numerous reports, that there was insufficient evidence to indicate the horses were slaughter bound. Have there been similar situations since the ban was implemented?

Transport to slaughter is horrific. Transport in one of these vehicles for any purpose is unsafe and traumatizing for any horse. Has the USDA's prohibition against the transport of slaughter bound horses eliminated all such transport? It is ironic that the Professional Rodeo Cowboy Association is the chief opponent to the Bill. Notorious for their own mistreatment of rodeo horses and other rodeo animals they appear to be the loudest voice against the Horse Transportation Safety Act.

We ask you to vote to stop the unsafe use of these trailers for horse transport and put an end to the abuse and inhumane treatment of our horses. Please consider and pass the Horse Transportation Act of 2015.

For the information of signers only, June 28, 2011 HSUS Press Release

The HSUS Praises Introduction of Bill to Improve Horse Welfare During Transport in U.S.

WASHINGTON — The Humane Society of the United States commends Sens. Mark Kirk, R-Ill., and Frank Lautenberg, D-N.J., for introducing S. 1281, the Horse Transportation Safety Act of 2011, an important measure to improve safety for horses during transport. The legislation would prohibit the interstate transportation of horses in a motor vehicle containing two or more levels stacked on top of one another. This bill is backed by organizations in the veterinary medical community, the agriculture industry and animal welfare groups, and is supported by a recommendation in a new Government Accountability Office report released last week which stated that a ban on the use of double-decker trailers for transport to slaughter would “protect horses through more of the transportation chain to slaughter.”

“We have long known that transporting horses in double-decker trailers is inhumane and extremely dangerous for the animals and a hazard on the highways,” said Wayne Pacelle, president and CEO of The HSUS. “It’s time to put a stop to this dangerous transport of horses, and we commend Senators Kirk and Lautenberg for taking the lead to end this suffering.”

The U.S. Department of Agriculture has stated: “We do not believe that equines can be safely and humanely transported on a conveyance that has an animal cargo space divided into two or more stacked levels” (9 CFR Parts 70 and 88).

“It is time that we put an end to the inhumane practice of using double-decker trailers to transport horses,” Sen. Kirk said. “Stacking these animals one atop the other in a moving vehicle is simply an accident waiting to happen. It is not only a cruel way to transport horses, but it also puts human lives at risk.”

In recent years, there have been a number of horrific accidents in which top-heavy, double-decker trailers carrying horses have flipped over en route to slaughter plants and feed lots. In 2006, a double-decker truck hauling 41 horses in Missouri crashed, killing 16 horses. In 2007, a trailer carrying more than 50 young Belgian draft horses overturned on an Illinois highway, killing 17 of the horses and severely injuring dozens more. Clearly this method of transportation is unsafe for horses and drivers, as well as others on the road.

“Transporting horses on our roadways must be done in a way that is both safe for the animals and safe for drivers on the road,” Lautenberg said. “Double-decker trailers cram horses into tight spaces and create dangerous, top-heavy loads that can lead to horrific accidents.”

This legislation was first introduced in 2009 and garnered the broad bipartisan support of 81 House cosponsors. While H.R. 305 successfully passed out of the House Committee on Transportation and Infrastructure, it never became law.

This measure is consistent with the American Veterinary Medical Association policy on the Humane Transport of Equines; the AVMA supported H.R. 305 and similar legislation in the past.

Please pass this Bill this year in this Congress, the horses can’t wait any longer.