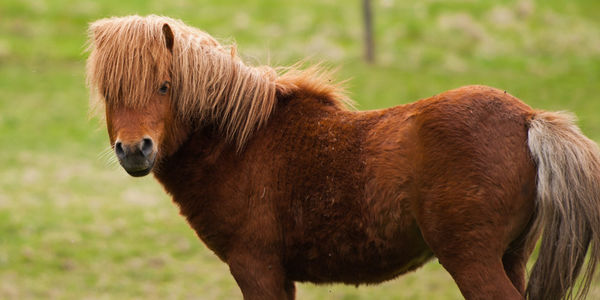 Miniature Horses Are Kicked, Abused, and Butchered at This Annual Pony Sale.

Dartmoor ponies are stout little mini-horses living in Dartmoor, UK, known for their resiliency and determination to survive. That makes it even more upsetting to know that there's recent video evidence of these ponies being abused and tormented while being sold off at auction.

Sellers of the animals apparently don't see these creatures as living, breathing beings -- but instead as cargo to make a profit off of. First, the freely-roaming animals are rounded up in the fall during "The Drift." Then, their captors take them to an annual pony auction in Dartmoor, where the little horses are traded away, making a few people some good money.

Recent footage shows that, after ponies were rounded up this past autumn, their captors left many of the creatures without food or water -- putting the animals in danger of death, and tormenting them with the pains of dehydration and malnutrition even if they survived. For those that made it to auction, further videos show handlers picking up ponies by their tails -- lifting them up by grabbing the hair on their butts to pull them from the ground! Then, at least one handler kicked a pony to force it onto a trailer.

Even worse, after being sold, ponies face an uncertain fate. While some go to join loving families, others are sold to slaughterhouses where they are butchered for scientific research or to become meat -- meat for both human and animal consumption. Some pony meat winds up in pet food, while some hunks and slabs wind up on zoo animals' dinner plates.

Luckily, many people in the Dartmoor area agree. A group called People 4 Ponies runs an animal sanctuary nearby and they're fighting to shut down the Dartmoor pony auction. It's time for us to stand with them.

Sign the petition to demand an end to the annual sale of ponies in Dartmoor!
Sign Petition
SHAREShare With FriendsTWEETEMAILEMBED
Sign Petition
See more petitions:
You have JavaScript disabled. Without it, our site might not function properly.