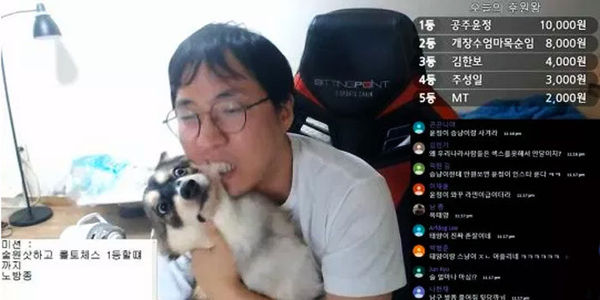 He Abused His Puppy and Showed It Off Online. Korea Must Strengthen its Animal Protection Laws, Now!

First he caught his pet dog, a sweet-looking husky, in a headlock from which it could not escape. Then he punched the animal in the face repeatedly, leaving it scared and battered. And then, he picked up the dog and bit it right on its head.

The poor little dog only ever wanted to do right by its owner. But that didn't stop his human — a popular YouTuber from Korea, known as Sseungnyangie — from vilely abusing the animal for public entertainment and streaming it to viewers all over the world.

Even worse, this isn't the first time he's viciously attacked his pet dog. Outraged netizens have reported him to the police for animal abuse numerous times over the past two years. But still, he's been able to get away with cruelty.

In fact, during one recent livestream, he even successfully shooed police away. A concerned viewer had called the authorities, who came over to his apartment while he was recording a video. Police told him he wasn't allowed to hurt his dog. He argues with the police until they leave.

Sseungnyangie then told his audience: "I can do whatever I want. I warned you. They can't do anything to me if I hit my dog."

Luckily, Sseungnyangie was ultimately wrong. Later, authorities did arrive and rescued the dog from him home, and an organization called Catchdog posted a photo showing the animal safe and well in its headquarters.

But there are two problems here — first, Sseungnyangie was allowed to keep this dog for far too long. Second, even though this dog was saved, that doesn't mean other animals are safe from the YouTuber. That's because the only Korean animal welfare law ever passed, back in 1991, offers minimal protection for pets suffering from abuse. For example, the law doesn't allow officials to ban abusive people from owning more animals in the future; and neither does it more harshly penalize repeat-offenders.

This needs to change. Lawmakers in Korea must make their animal protection laws tougher! Sseungnyangie and people like him must never again be allowed to abuse animals for their own entertainment. Sign the petition if you agree!
Sign Petition
SHAREShare With FriendsTWEETEMAILEMBED
Sign Petition
See more petitions:
You have JavaScript disabled. Without it, our site might not function properly.

Care2
He Abused His Puppy and Showed It Off Online. Korea Must Strengthen its Animal Protection Laws, Now!
SHARETWEET