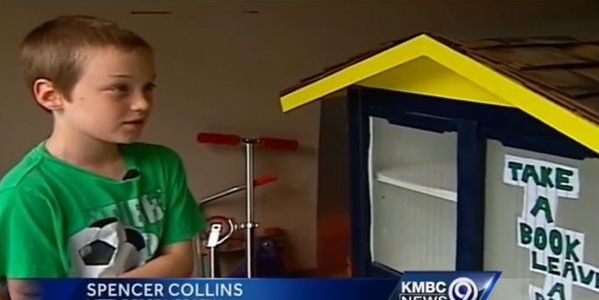 All 9-year-old Spencer Collins wanted was a collection of free books, shared by area residents - they could take or leave as many as they wanted. The son of a teacher, who himself loves to read, Spencer had the idea that his little library, in a homemade structure in front of his home, would not only encourage reading but also a community feeling among neighbors.

But Leawood, Kansas city officials claim Spencer's library violates a city ordinance, banning any freestanding structures or buildings that are not attached to a person's house. Spencer's family agrees with the law as a whole, but feels that in this particular case, it's being misapplied. Although they complied and took down the library, they plan to appeal at the next city council meeting.

Please, Leawood officials, show this child that you value reading and community spirit as much as he does! His plan can only help area residents, not hurt in any way.