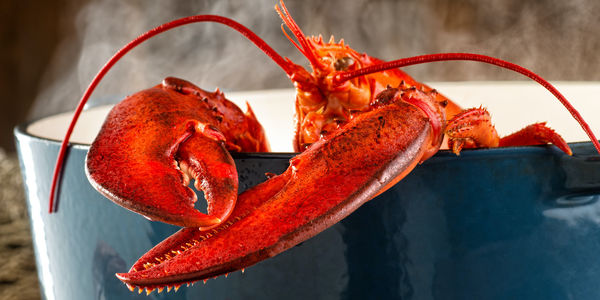 Boiled alive until they're tortured to death. Save lobsters from excruciating deaths!

It is still common practice in the UK — and around the world — to shove living animals into what they think are baths, only to boil them alive in some of the most painful and helpless of circumstances imaginable.

The particular animals who are often trapped — bound up and locked in pots of deadly, ever-hotter water until their bodies are essentially scalded to death — are, of course, lobsters. Being marine creatures without lungs or vocal cords, they can't communicate with humans. They can't even make the sweet mammal-type eyes at us that we've learned to swoon at. So when it comes to torturing these animals into the most excruciatingly painful oblivion, humans have often been all for it.

That's why it's so exciting that the UK government is considering banning the practice of boiling lobsters alive! Sign the petition to demand that British lawmakers actually pass the Animal Welfare (Sentient) Bill that would give crustaceans and molluscs like lobsters actual rights!

For generations, the food industry has been trying to convince the public that lobsters "don't really feel pain." But that's nonsense. Lobsters trapped in vats of boiling, bubbling water desperately try to escape, panicked to save their own lives and stop the torment.

Other countries are already starting to realize that, in order to value animals' wellbeing, lobster-boiling must end. In Switzerland, Austria, and New Zealand, this culinary practice has already been prohibited. If the UK were to join their ranks, countless more defenseless animals would be saved from fates of unimaginable pain and suffering.

But if they don't hear our voices, British lawmakers could easily be swayed by the powerful representatives of the restaurant and fishmonger industries. We need to make sure lobsters aren't condemned to lives (and deaths) of misery simply because humans often don't find them "cute" enough to care about.

If people are going to eat these poor critters, the very least we can do is to at least help them leave this lifetime in more humane ways.

Tell the UK Parliament to protect animal welfare by passing the Animal Welfare (Sentient) Bill!
Sign Petition
SHAREShare this petition with friends!TWEETEMAILEMBED
Sign Petition
See more petitions:
You have JavaScript disabled. Without it, our site might not function properly.

Care2
Boiled alive until they're tortured to death. Save lobsters from excruciating deaths!
SHARETWEET