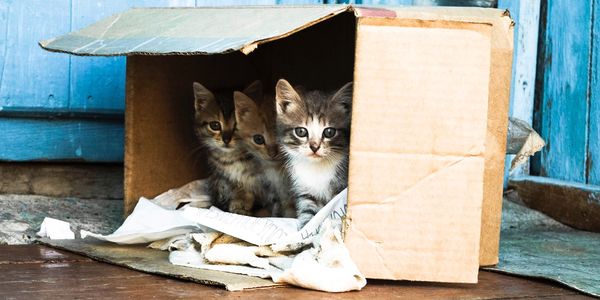 Four Baby Kittens Were Tied into a Plastic Bag, Abandoned, and Left to Die.

As spring is now in full swing in the Northern hemisphere, flowers begin to bloom, the sun shines more fiercely -- and kitten abandonment season has also begun. Spring is often a time of new animal births, and that's true for kitten populations as well. Unfortunately, not everyone who comes into contact with kittens wants them. And far too often, those baby animals wind up discarded in boxes and bags, left to die.

One Reddit user brought this to attention recently by sharing sad photos. Someone had left a plastic grocery bag on the side of a street. It was tied shut, but obviously full of something, and that something was wriggling. Luckily, when a passerby got closer, they decided to open the bag. It's a good thing they did -- inside was a whole litter of newborn kittens!

Animal shelters need our help to make sure they can be there for all animals, including abandoned kittens like these!

These little cats aren't the only ones to have found themselves frightened and confused inside a plastic death chamber. Earlier this year, a sanitation worker in France heard cries coming from the back of a garbage truck, inside a thick plastic trash bag. He climbed into the truck to rescue the animals, ultimately needing to cut the bag open with the knife because it was knotted so solidly. Five kittens looked up at him, none seemingly more than a week old. And these are just two examples of heartbreaking instances that happen all the time, in the U.S. and all over the world.

According to the American Society for the Prevention of Cruelty to Animals (ASPCA), "feline breeding season" has sadly become a "time of year when thousands of homeless kittens flood animal shelters across the country." But it's even worse when those animals don't wind up at shelters -- being left to starve or suffocate somewhere in a closed container.

But it doesn't have to be this way. If people don't want their pets, or wind up with a new litter of baby cats or dogs they can't afford to take care of, they should find a local animal shelter that can accept the animals. Unfortunately, though, not all shelters have space -- some are already filled to the max. That's why we need more funding for animal shelters, so there can be room for all animals until they find a new, loving home!

We must urge U.S. state governments to allot more funding for local animal shelters. All animals should have a safe and healthy place to live before they find their forever family! Sign the petition if you agree.
Sign Petition
SHAREShare With FriendsTWEETEMAILEMBED
Sign Petition
See more petitions:
You have JavaScript disabled. Without it, our site might not function properly.

Care2
Four Baby Kittens Were Tied into a Plastic Bag, Abandoned, and Left to Die.
SHARETWEET