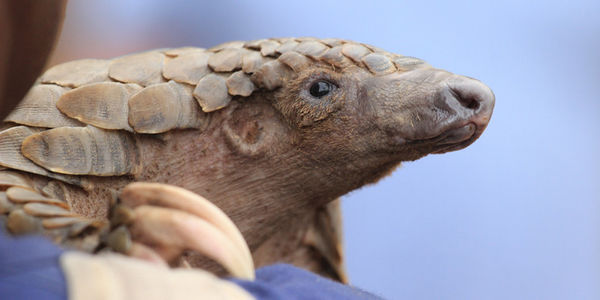 Pangolins arrive at this clinic sick, wounded, and emaciated by poachers. Then volunteers nurse them back to health.

You might not recognize a pangolin if you saw one, but like other animals, all it wants is a good life free from pain and suffering. Yet pangolins are one of the most victimized animals in the entire world. They're at the top of the lists for both most-poached and most-illegally-trafficked. Now, they're getting closer and closer to the edge of extinction.

Who's going to rescue these amazing, scaly, housecat-sized creatures? Right now it's a group of volunteers in South Africa known as the African Pangolin Working Group.

But they should not have to be doing this work alone. Sign the petition to demand that the United Nations, United States, and South Africa offer governmental funds and assistance.

The volunteer team includes veterinarians and experts on wildlife, and they've spent almost 10 years working to save injured, sick, and nearly-dead pangolins.

Some pangolins are so badly dehydrated and starved, they need to be tube-fed and put on drips. Others have been caught in snare traps, with slices going through their legs and torsos. And still more animals have actually already been abused and tormented by poachers, often for up to days or even weeks before arriving at the volunteer group's veterinary hospital.

Just last year, authorities discovered that more than 150,000 pangolins were poached — in other words, murdered. Their scales were then sliced off their bodies and handed over to smugglers, to traffick them to purchasers overseas.

But Professor Raymond Jansen, the chairman of the pangolin group, says his sources suggest that's only 20% of the total. This means that as many as 750,000 pangolins may have been butchered and had the outer layers of their bodies ripped off them, just in a single year alone. With these numbers, it's easy to see how pangolins have almost been wiped off the face of the planet.

The African Pangolin Working Group wants to do more than just nurse maimed and wounded pangolins back to health, though. It also wants to crack down on illegal poaching and trafficking. But this is dangerous work that volunteers should not have to do on their own.

Tell international governments, including the U.N., U.S., and South Africa to step in and show real commitment to pangolin protection!
Sign Petition
SHAREShare With FriendsTWEETEMAILEMBED
Sign Petition
See more petitions:
You have JavaScript disabled. Without it, our site might not function properly.

Care2
Pangolins arrive at this clinic sick, wounded, and emaciated by poachers. Then volunteers nurse them back to health.
SHARETWEET