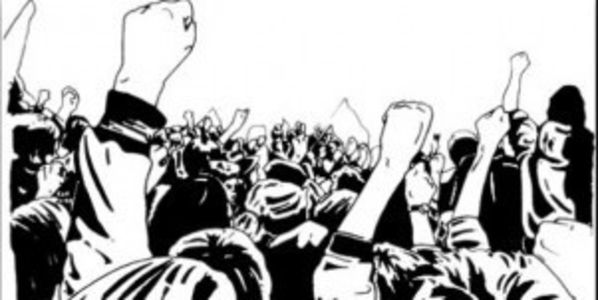 Voice Your Support for the Green Party of the United States Becoming Anti-Capitalist!

UPDATE: This amendment has passed! However, please still sign as it has to be ratified by the GPUS Convention in August.


An amendment was before the US Green National Committee to make the Party anti-capitalist: it rejects capitalism and state socialism and calls for full democratic control of our economy. Many do not join the US Greens because they do not see us as much different than progressive Democrats. The passing of this amendment will help us to stand out and not only attract those who want to break the stranglehold of the two party system, but to fight for a fair, just, and new society. (Text of the Amendment is listed at the bottom).

*****PLEASE SIGN IF YOU SUPPORT THIS WHETHER OR NOT YOU ARE IN THE GREEN PARTY. If you are not in the Green Party but would join if this passes, please indicate such in your comment under your name.

Text of the Amendment:

BACKGROUND AND PURPOSE: This new platform plank removes the old wording entirely and addresses the economic inequalities, social inequalities, and productivism of both capitalism and state socialism and emphasizes grassroots democracy—in the workplace. This workplace grassroots democracy has been largely absent from the Green platform, and many believe it is the way forward for a truly ecological economy and a new system. This new platform plank does not promote expropriation of privately owned small businesses and should not be interpreted as such. Rather, the plank outlines the type of businesses and type of economy we would like to create.

PROPOSAL: To amend Chapter IV. Economic Justice and Sustainability 1. Ecological Economics Paragraph 4 Current language of plank that is being addressed: “Sustaining our quality of life, economic prosperity, environmental health, and long­term survival demands that we adopt new ways of doing business. We need to remake commerce to encourage diversity and variety, responding to the enormous complexity of global and local conditions. Big business is not about appropriateness and adaptability, but about power and market control. Greens support small business, responsible stakeholder capitalism, and broad and diverse forms of economic cooperation. We argue that economic diversity is more responsive than big business to the needs of diverse human populations.”

Proposed amendment of the current language: Greens seek to build an alternative economic system based on ecology and decentralization of power, an alternative system that rejects both the capitalist system that maintains private ownership over almost all production as well as the old narrative of state socialism that assumes control over industries without democratic, local decision making. We believe the old models of capitalism (private ownership of production) and state socialism (state ownership of production) are not ecologically sound, socially just, or democratic and that both contain built­in structures that advance injustices. Instead Greens will build an economy based on large­scale public works, municipalization, and workplace and community democracy. Some call this small­scale, decentralized system “ecological socialism,” “communalism,” or the “cooperative commonwealth,” but whatever the terminology, Greens believe it will help end labor exploitation, environmental exploitation, and racial, gender, and wealth inequality and bring about economic and social justice. Production should be democratically owned and operated by those who do the work and those most affected by production decisions. This model of worker and community control will ensure that decisions that greatly affect our lives are made in the interests of our communities, not at the whim of centralized power structures of state administrators or of capitalist CEOs and distant boards of directors. Worker­owned production, embedded in and accountable to our communities, provides an incentive for enterprises to make ecologically sound decisions in materials sourcing, waste disposal, recycling, reuse, and more. Democratic ownership of the means of production would decentralize power in the workplace, which would in turn decentralize economic power more broadly.

IMPLEMENTATION / TIMELINE / RESOURCES: Approval of this proposal will amend the 2016 Platform, which will be published on the GPUS website in or before September, 2016.

REFERENCES: In addition to having been edited and/or reviewed and endorsed by Gloria Mattera (GPNY), David Cobb (GPCA), Ben Manski (GPWI), and others, this platform amendment has also been reviewed and endorsed by these individuals: Gar Alperovitz , Green Shadow Cabinet; the Next System Project Richard D. Wolff , author of Democracy at Work and other books; lecturer; Green Shadow Cabinet; founder of Democracy at Work, nonprofit organization

Care2
Voice Your Support for the Green Party of the United States Becoming Anti-Capitalist!
SHARETWEET