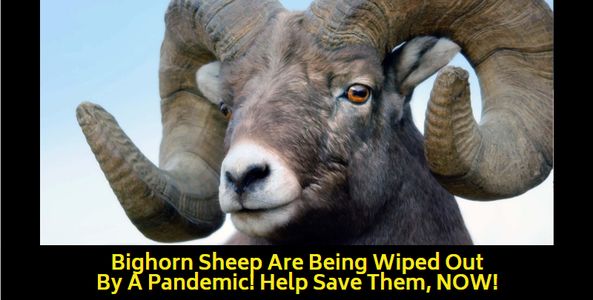 Save America's Bighorn Sheep From A Terrible Pandemic!

There used to be millions of these magnificent animals across North America; now only a few are left!

Add your name if you want to help protect them, before it's too late!

"This winter, a series of news reports highlighted the plight of bighorn sheep across the West dying from pneumonia harbored and transmitted by domestic sheep.

"Estimates are that over 2 million bighorn sheep once inhabited North America. Today only a small fraction of that number survive, many in Canada.

"The West's wild bighorn populations are confined to bits and pieces of their historic range. Whole herds are periodically wiped out by disease," reported Counter Punch.

Long ago, when domesticated sheep were brought to North America from your Europe, they brought with them a horrible disease that causes pneumonia.

Native bighorn sheep have no immunity to the bacteria.

And they die in droves.

As of today, only about 65,000 are estimated to live throughout the continent, from Canada to Mexico, according to numbers published by the San Diego Zoo Global Library.

That number may sound big, but the population is widely distributed and heavily fractured, making each group essential to the survival of the species.

And when the disease strikes, it can wipe out an entire herd, leaving no survivors.

But here's the worst part...

Big Business wants to open up even more land to grazing for domestic animals, which will further put these precious animals at risk.

Counter Punch explained the situation using Wyoming as an example: "In Wyoming, cattle and sheep ranchers are prodding the Bridger-Teton Forest to open closed allotments and impose sheep grazing in places where conservation groups paid to buy out and retire grazing permits specifically because of wildlife conflicts.

"Bridger-Teton National Forest officials are taking steps to allow sheep and cattle to return to lands vacated by livestock producers who voluntarily accepted payments to graze their herds elsewhere.

"This is part of a larger engrained state and federal agency culture of repression of forthright discussion of the toll that sheep and cattle grazing takes on wildlife.

You know how much humans have suffered from COVID-19.

Bighorn sheep have been suffering from a similar disease for a very long time.

It's on us to change that.

The Bureau of Land Management, in conjunction with the National Park Service, oversees all public and national park lands in the United States. They have the power to protect these wonderful animals for good.

That's why we're asking them to listen to reason and make sure that America's few remaining bighorn sheep are protected from disease spread by domestic livestock.

Don't you want to ensure that bighorn sheep survive forever?

Then add your name to ask William Perry Pendley, Director of the Bureau of Land Management; and David Vela, Deputy Director Exercising the Authority of Director for the National Park Service, take strong action to protect America's bighorn sheep!

Care2
Save America's Bighorn Sheep From A Terrible Pandemic!
SHARETWEET