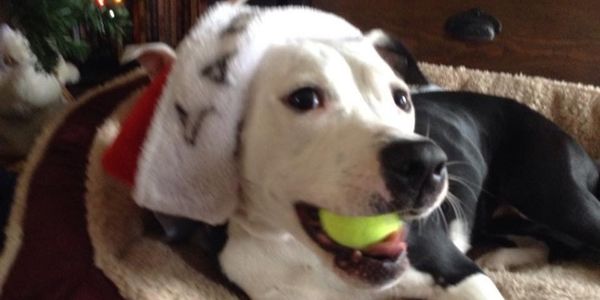 I am a single mother with 4 kids. I pay my taxes. I believe in absolute freedom, and take care never to infringe on any persons rights. My mistake, and apparent crime, was taking in 2 abused and abandoned dogs, and one wandering to the sidewalk outside of my fence. She harmed no one, and nothing. Here is my story.

I have spent the past couple days in jail because the Constitution of The People has been suspended. I believe Maritime/Admiralty law has taken its place. I get this indication from the gold fringe and tassels that we mistake as meaningless and pretty decorations. I have not deeply studied Maritime/Admiralty law yet. I know that it is the law of water, and of commerce, and that it secretly affects the people who are charged in the courts in which it stands. I know that it is not an Article 4 flag of freedom and justice for all. I assume it gives Government blanket jurisdiction over everything and everybody.

I was unexpectedly saddled with 2 homeless American Pitbull Terrier dogs. I was hoping to re-home them but they are still in my possession. I do not believe in the unnecessary murdering of animals, so I did not give them to the local animal shelter. I have some space and they are extra friendly. One dog somehow escaped the back yard and walked around my property to the front sidewalk. She was sitting outside my front fence. The next day, the neighbors told me they saw her sitting there and called the pound. I immediately went to pick her up. The shelter attempted to force me to pay fees which totaled $300. Why? I hadn’t requested services. I stated various violations of Constitutional rights and they told me they’d give her back if I sign a letter promising to spay and vaccinate her. I signed under duress, got my dog, and left.

By what authority does Government believe it can force us to bow to Its will?! The next day I received a failure to comply and an order to show cause from the city court clerk. The date for me to comply on the shelter documents was not for another 5 weeks. To what am I failing to appear or comply? I began researching my rights. I filed a Motion to Dismiss on Jurisdiction. I received a Failure to Appear Summons. I responded with an Answer questioning Jurisdiction. I received the same Failure to Appear. Again, I responded with a Motion, including an appeal to the Judge to please stick to his Oath. I received a repeat Failure to Appear including an Order and a Motion Denied and a Bench Warrant. I planned to go into the court the next day. Before I could go into court, my house was surrounded by police. I did not run out the front door because I am disabled physically and it takes me a bit to get from one room to another. I guess I took too long and the police were on my deck, threatening to break the door down. They put everyone in handcuffs, including my 2 minor children and a friend who was visiting. They took us to jail but it was only me they booked.

The next day I saw the judge, but it was on a monitor from the jail. No witnesses. He immediately recused himself from the case. I learned from another inmate who had just come back from the courtroom that she overheard my judge tell the new judge that he was tired of arguing with me. They should whisper better. When my new judge came on screen, he asked me if I understood the charges against me. I responded ‘NO, I do NOT understand the charges against me, sir.’ He told me that I first needed to plea and then he would explain them to me. When I insisted that I could not enter pleas without understanding the charges, he began entering pleas for me. I respectfully interrupted with ‘Is your Honor practicing law from the bench?’ Judge Arthur completed the entire arraignment on his own, completely ignoring my successively louder objections. He told me I would meet my Public Defender in the morning. I had not asked for a Public Defender. I attempted to tell him I refuse a Public Defender and I could defend myself if he would just uphold the Constitution but the Judge ended the monologue by turning off the monitor.

Resisting Arrest (I took too long to answer the door because I couldn't get me cane from its perch to be able to walk. I have brain tumors and am disabled)

I filed objections the moment I got home from jail. There was no bond, so I had to sit there until he willed me to be free. 2 days.

At my forced arraignment, the judge gave me a plea deal even though I had not pled, but he had for me. The deal is 90 days in jail and $1500 fine.

This is America under Gold Fringed Admiralty/Maritime Law. America Corporation is NOT a free country. Had the Constitution of We The People been applied, I would not now be a criminal with a record.

Please help me establish more Pet Parent friendly laws, tighter holds on Government overreach of our rights, and a restriction on Government fundraising via criminalization of our inherent right to life, liberty and property.


Solution
Petition our courts, commissioners, and local Government to respect our Constitutional right. Stop breaking the Law and respect pet parent/pet rescuer freedoms. Their ordinances make it hard to own and care for abandoned pets.
Sign Petition
SHAREShare this petition with friends!TWEETEMAILEMBED
Sign Petition
See more petitions:
You have JavaScript disabled. Without it, our site might not function properly.