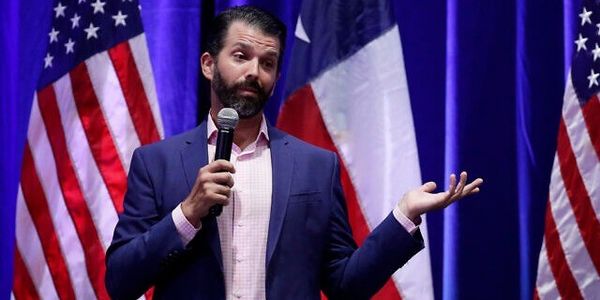 Donald Trump Jr., first son and chip off the old fascist, casually tweeted the identity of the alleged Ukraine scandal whistleblower on November 6th, citing Breitbart, no less, as his source.

This is a possibly criminal act that deliberately jeopardized the safety of a brave public servant as an act of vengeance and intimidation, and we must not accept it.

The entire premise of whistleblower protection depends on keeping the identity of the individual anonymous. As former Defense Secretary and CIA Director Leon Panetta described it, "The whole purpose of that law was to allow people to be able to speak to fraud or crimes they see within their jobs and without having to pay a price for vengeance and retribution."

Panetta also noted that having a president reveal a whistleblower's identity would be "unprecedented in history." And while Donald Trump Jr. doesn't hold an official position in his father's administration, it's an easy line to draw, and – like most lines with the Trump family – an even easier one to blur. As we've seen with so many other scandals engulfing this administration, we're having to regularly recalibrate the meaning of the world "unprecedented" to meet the moment.

Outing an individual brave enough to step forward anonymously on behalf of the rule of law serves as a warning shot to any other potential whistleblowers, invites retaliation, and raises serious questions about obstruction of justice. Demand Congress and the Department of Justice hold Donald Trump Jr. and the Trump administration accountable for this reckless act and any harm that may come from it. We must draw a bright red line here – one that can't be smeared away by callous, flailing acts of self-preservation.