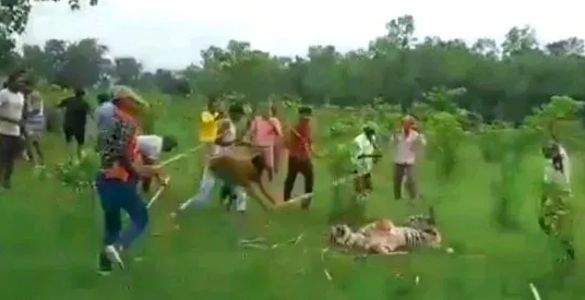 Over 40 people surrounded a tigress and beat her to death in India all because she acted like the wild animal she is and attacked humans. Obviously that's not good, but there are humane ways to capture a tiger and relocate it away from humans, there is no need to brutally muder them.

Sign on if you want the 40+ people involved in this heinous crime to be held accountable and for India to commit to catch and relocate instead of killing tigers who get into it with humans.

That actual killing took a long time. Humans beat her incessantly with bamboo cains for hours and then she died a little later, meaning not only was she murdered, but she suffered tremendously for many hours on her way out of this world.

The authorities are saying they know who most of the people are and are tracking them down, but as we know, animal abuse sometimes gets lost in the cracks. That's why we need to keep the pressure on and ensure they find every single person who aided in this tragic death.

Tigers are endangered animals, meaning they should be protected. In fact, there are fewer than 3,000 left in India and only 4,000 worldwide and this mob just mudered one. Not only did they murder it, but they also filmed the whole incident, apparently feeling really good about thair choice.

The tiger is the official animal of India and it deserves more respect. Tigers in India have been threatened so much, all due to human greed. They are being poached, their habitats are being destroyed and now humans are murdering them.

Please sign on to protect other tigers in India by holding this mob accountable and ensuring capture and relocation next time there is a problem with tigers and humans.