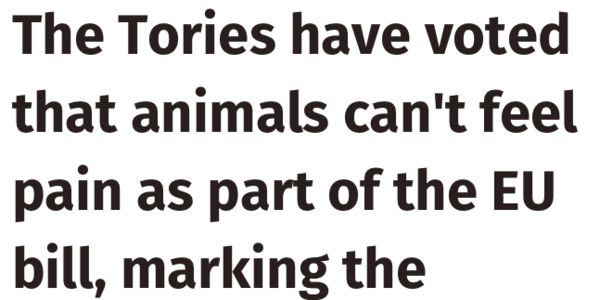 I have taken the wording from another petition from "compassion in world farming! I can't believe the UK government is leaving out this very important issue: If the government gets its way, animals will no longer being recognised as sentient beings and the government will no longer being required to pay full regard to their welfare. THIS IS UNACEPTABLE !!! In current European law, animals are recognised as sentient beings, acknowledging their ability to feel pain, suffer and also experience joy. No one who has seen a cow going outside for the first time after a winter indoors, a hen dust bathing, or a pig wallowing in a fresh patch of mud would disagree with that. The law says that as animals are sentient beings, full regard must be given to their welfare when creating new legislation or regulations. Securing this status for animals was a massive step forward for animal welfare in 1997. It was the biggest campaign Compassion has ever run. The recognition of animals as complex and intelligent creatures has been the cornerstone of European animal welfare legislation since that time, and the basis for so much of the progress we have made together. So what's the problem? The Repeal Bill, which moves all European law into UK law once we leave the EU, has left out this important protection. It is completely absent; both the recognition of animals as sentient beings, and the requirement for governments to pay "full regard" to their welfare. Once the UK leaves the EU, we cannot be sure that future Governments will still treat animals as sentient beings. Please demand that the clause is brought into UK law. Sign and SHARE my petition today!

The conservatives are saying that they do believe animals are sentient however they have decided not to use the EU laws on animal rights, I and everyone else should be worried about what could happen to animals, conservatives such as Ross Thompson have claimed that they want to improve animal rights in the UK, if this is true or not, we need to stand together and protect animal rights and improve them. I am very worried that the conservatives will make animal rights worse in the UK so they can be hunted or exploited to make more money for greedy corporations, I have made this petition because I will not stand for any animals life to get worse due to the lazyness or greed from the government and I hope that this petition can help improve animal rights in the UK and around the world. Animals are living, they have the same right to be alive just as much as we do but we take because we can.

The Tories are declaring that all animals (apart from humans, of course) have no emotions or feelings, including the ability to feel pain. While debating the Brexit bill, MPs voted not to transfer into UK law the parts of EU legislation which recognise animals have sentience, and can feel pain and emotions. - Independent

Any questions or concerns feel free to email at Eoghann100@googlemail.com

Any support will be appreciated!