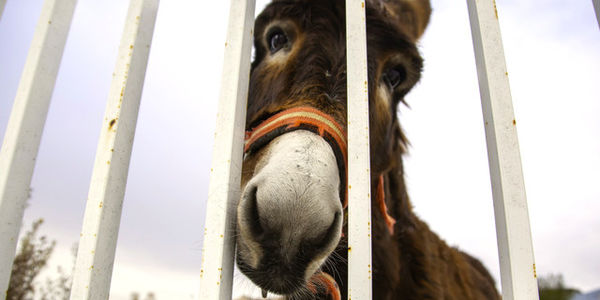 It was a classic case of cruelty and humans shrugging their shoulders as the hoard of donkeys were rounded up and pushed into a truck that was too small to fit all of them. But the handlers didn't care: the donkeys needed to be transported, so they were all going to get on that truck -- whether it was safe or not.

And that's how several donkeys were forced into the horrific position of accidentally trampling one of their kin to death.

Sign the petition to demand justice for the donkey that was stomped to death!

As they were coerced into the truck as part of an international transit, one of the many scared, confused donkeys tripped up and slipped underfoot -- but the other animals were still being pressured to move and so they were unable to stop. The donkey on the floor wanted to get away, but because the space was so small, it had nowhere to go and no way to move.

Imagine the heartbreak of realizing you've kicked and trampled one of your own to death. It was not this donkey's fault that it landed squarely underneath its brethren. And it was not the other animals' faults that they were corralled over this poor being.

The shipment, which was loaded up in Israel and headed for Gaza, was ultimately bound for Egypt -- quite a ways away. There, the donkeys were to be sold into the meat and skin industries to be slaughtered and stripped of their hides.

Experts, including Israel's Ministry of Agriculture, say the handlers may have violated the country's Animal Cruelty Law, but would require further analysis to be certain. Certainly more actions need to be taken to enforce this Animal Cruelty Law -- and stronger provisions must be passed to keep live animals safe from horrific exportation conditions!

Sign the petition to urge the Israeli government to ban live animal exports!
Sign Petition
SHAREShare this petition with friends!TWEETEMAILEMBED
Sign Petition
See more petitions:
You have JavaScript disabled. Without it, our site might not function properly.