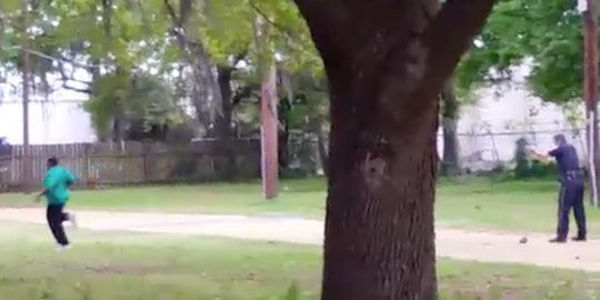 On July 29, Ray Tensing - a police officer for the University of Cincinnati - was charged for the murder of unarmed black man Sam DuBose, whose only crime was a missing front license plate.

Prosecutor Joe Deters said, "He should have never been a police officer... I have reviewed upward of 100 police shootings. This is the first time I thought without question this is a murder."

The prosecutor said the indictment would not have happened without the officer's body camera, which proved he murdered DuBose and lied about it in his report.

The incident is very similar to the April murder of Walter Scott, an unarmed South Carolina black man. "Officer" Michael Slager shot Scott in the back, planted a weapon, and lied in his report. He was only caught and charged because of a witness's phone camera.

Justice comes from stopping murders, not from indicting the murderers later. But catching rogue cops on camera over and over again will set an example and help make that goal a reality.

Video doesn't always put killer cops in jail, but almost every time they do go to jail, video was involved. In time, this and other crucial steps to reign in systemic racism and hold police accountable will help reform departments around the country. That's why a major U.S. Department of Justice report recommended that officers wear body cameras, and Care2 agrees.

Sign the petition and tell your governor: We need justice now. All patrol officers must wear cameras, for my safety and theirs!

read petition letter ▾
Governor, I signed this urgent petition to you about criminal justice, systemic racism, and public safety: "We need justice now, especially for black lives disproportionately killed by the system. All police patrol officers in __STATE__ must wear body cameras, for both my safety and theirs. As the deaths of Sam DuBose in Cincinnati and Walter Scott in South Carolina show, when rogue cops kill without reason and lie about it in their police reports, the existence of camera footage is one of the biggest determining factors in whether or not there will be accountability. Cameras can also protect good police officers from false complaints. Please take action to make sure every patrol officer in our state wears a camera!" [YOUR COMMENT HERE]
Sign Petition
SHAREShare this petition with friends!TWEETEMAILEMBED
Sign Petition
See more petitions:
You have JavaScript disabled. Without it, our site might not function properly.