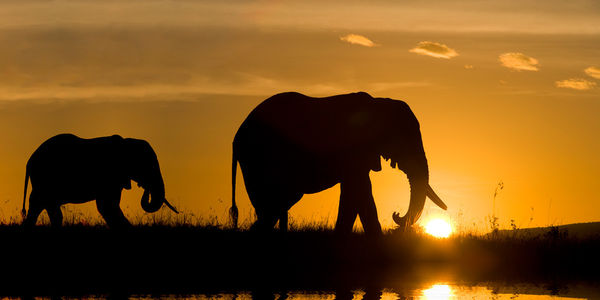 Keep Elephants in Africa Where They Belong!

The Dallas Zoo, Henry Doorly Zoo, and Sedgwick County Zoo are putting the “con” in conservation for their despicable efforts to traumatically remove 18 elephants from their families and import them from Swaziland. The zoos are working with Big Game Parks, a privately-owned outfit that runs the two reserves containing the elephants.

Big Game Parks is claiming that if they don't export the elephants, they would have to kill them because the population in the reserves has grown too large. “Too large” is a population of less than 40 elephants. Conservationists say that since the elephants are confined to a relatively small area of the reserves, there is little to indicate that the elephant herds are negatively impacting other wildlife.

Even if there were overpopulation problems in the reserves, the solution would be to send the elephants to another reserve in Africa, not to ship them thousands of miles away to live in captivity. The data shows that elephants are not thriving in zoos, where they often fail to breed, experience high infant mortality rates, and many die prematurely. As a result, zoos are finding it more and more difficult to keep their elephant displays going.

In exchange for the 18 elephants the zoos are offering Big Game Parks $450,000. This transaction is not about wildlife conservation; it's about money. Please sign this petition to demand that the Dallas Zoo, Henry Doorly Zoo, and Sedgwick County Zoo step away from the deal with Big Game Parks and leave the elephants in Swaziland where they belong.

The vast majority of elephants now in zoos were taken from their homes and families in the wild.  Zoos rob elephants of their most basic needs, including extended social relationships and the opportunity to walk long distances. Lack of exercise and long hours standing on hard surfaces are major contributors to foot problems and arthritis, the leading reasons why captive elephants are euthanized. Many die decades short of their expected lifespan. Elephants require vast spaces to roam, socialize, and express their natural behavior. In the wild, they live in matriarchal herds and are active for 18 hours per day, foraging for fresh vegetation, playing, bathing in rivers, and travelling as far as 30 miles a day.

The elephant-care standards adopted by the Association of Zoos and Aquariums (AZA) are woefully inadequate. The AZA does not prohibit keeping elephants in frigid northern climates (as a result, many in these regions spend months indoors each year), and it does not expressly prohibit the use of bull hooks or chains. Even though elephants thrive in family herds, the AZA allows them to be kept in near-isolation. Zoos are only required to hold two or three female elephants, two males, or three of mixed gender.

Many zoos are squandering millions of dollars to increase the size of their elephant exhibits only slightly, but elephants in captivity don’t need a few more square feet—they need, at minimum, square miles. Because of space limitations, no amount of expansion at any zoo will give them the complex, varied habitat—with ponds, mud, trees, and hills—that they need for their physical and psychological well-being.

Breeding elephants in captivity has been a colossal failure. For every elephant born in a zoo, another two die—yet zoos continue to breed elephants in an effort to churn out more “cash cows.” According to an indepth report by investigative reporter Michael, the overall infant-mortality rate for elephants in zoos is an appalling 40 percent—nearly triples the rate of elephants in the wild. Artificial insemination involves the insertion of probes, catheters, and scopes into an elephant’s rectum and complex vaginal opening. There’s nothing simple or straightforward about this procedure. Elephants are often chained by their legs when they give birth. At the Woodland Park Zoo in Seattle, an elephant named Chai was subjected to traumatic artificial insemination 112 times, with only one successful birth: a calf that later died. In a 25-year period at the Houston Zoo, 14 out of 14 elephant calves died—a 100 percent mortality rate. Those who manage to survive will never be released to the wild.

The bottom line is that zoos breed elephants because babies bring paying visitors through the gates. The tens of millions of dollars that are spent each year at zoos for a small number of elephants should instead be responsibly directed toward elephant conservation work in Asia and Africa.  While zoos waste resources, legitimate conservation groups struggle for funding. On an annual budget of just $500,000, the Amboseli Trust for Elephants in Kenya makes a difference for the Amboseli National Park’s 1,500 African elephants as well as for the Kenyan farmers living nearby who lose their crops to elephants every year. The group’s presence in the park also discourages poaching—the Amboseli elephants are the least threatened population of elephants on the African continent.

The claim that zoos are saving elephants by displaying them has been debunked. Elephants have been exhibited in zoos for more than a century, yet they’re facing extinction in the wild. Placing these intelligent and complex individuals in conditions that are harmful to them, just so that we can look at them, teaches us nothing.

Since 1991, more than a dozen zoos in the U.S. have closed their elephant exhibits or announced that they intend to phase them out, citing an inability to provide the animals with proper care. This progressive trend must continue. Zoos need to abandon failed breeding programs and stop pretending that elephants can thrive in captivity. Elephants should be retired to reputable, accredited sanctuaries such as The Elephant Society in Tennessee or the Performing Animal Society in California.

This is a serious issue that needs to be addressed. These are lives that are valuable and should be treated as such. No living creature should be enslaved for the greed of man.

Care2
Keep Elephants in Africa Where They Belong!
SHARETWEET