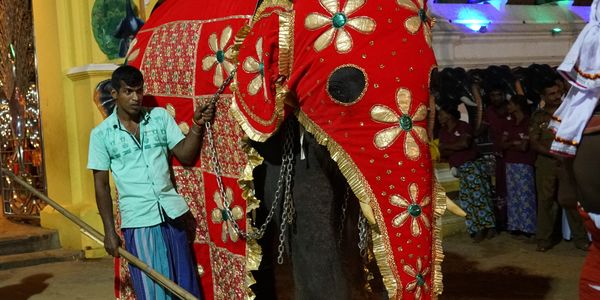 The wild-born illegally captured baby elephants are at present in the safe custody of the Department of Wildlife Conservation as their legal custodians, with the exception of baby "Ganga" who is yet to be taken into protective custody as per the court order issued by the Colombo Magistrate's Court.

The illegal captors are a part of an organized criminal network  operating at every level of society. Some of these criminal members (sadly including our very own politicians) have been exposed by ongoing legal action since 2014. Despite this, the commercially driven and inhumane industry of elephant capture and captivity continues under the guise of culture and religion!

This is a complete contradiction of the very teachings of the Buddha – the "Dhamma" - which it claims to protect, through rituals and rites, served by criminal means.

With their cases pending in court, the baby elephants were successfully prevented from being returned to their illegal captors in 2017 for the cultural pageants that require brutal training. Sadly, one female wild-born baby elephant in the safe custody of the State was released to her illegal captors while the court case was pending, panicked at a pageant and subsequently killed her mahout! Now, these babies are being forced to return into the very same hands of their illegal captors with the blessing of several parliamentarians in Sri Lanka.

In respect of the law, we therefore request you to take all necessary remedial actions to prevent the illegal release of these baby elephants who are the public property of our land and give them due justice as Sri Lanka's flagship species.

FOR THE ATTENTION OF:

Minister of Department of Wildlife Conservation and Tourism

Ministry of Justice and Prison Reforms