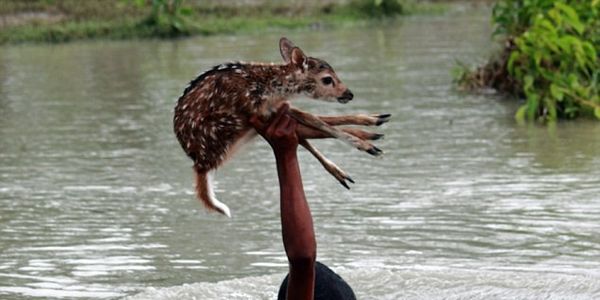 A young boy in Bangladesh risked his life

in a surging river to rescue a drowning baby deer,

prompting cheers from locals who weren’t sure whether Belal would reach the other side or be swept away.

where torrential rain caused fast-rising floods, causing the deer to be separated from its family, according to Caters News Agency and the U.K. MailOnline.

Belal, as you can see in the photos (which tell the whole story),

grabbed the baby deer by its legs with one hand and held it high over his head as he trudged through the water,

sometimes with his head fully submerged.

It was during those tense moments that onlookers believed the boy might perish.

But the young teen persevered.

“He was such a brave boy—the river was so full of water and it was high tide so we thought he might drown,”

Wahab told MailOnline. “My friend was even ready to jump into the river to save the boy.

But he made it, and when he returned, we thanked the boy.”

Only about seven people witnessed the act of bravery and kindness, according to Wahab.

“It was a phenomenal sight,” he said.

Wahab told MailOnline that locals lose a lot of deer during the rainy season and are forced to do all they can to protect them,

such as going to extreme measures like a young teenaged boy named Belal did.