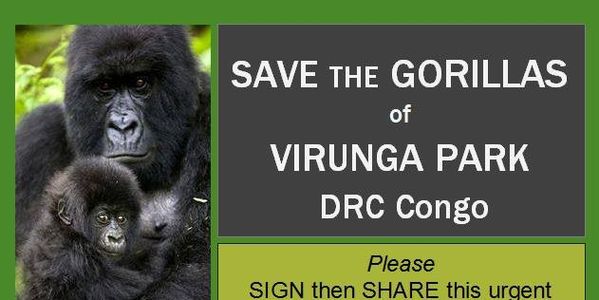 Protect the Gorillas and Rangers of Virunga Park, DRC

As citizens of the World, we appeal to all World Government Organizations [ United Nations , EU Parliamentary, GRASP – United Nations’ Great Apes Survival Partnership , UNESCO, IUCN, African Conservation Foundation] and the Governments of  USA & Belgium,
to intercede to bring Peace to Virunga Park, DR Congo.
Protecting the Park in the midst of armed conflict due to the presence of several rebel militia groups is an impossible task. Help must be sent to Virunga National Park Rangers.
We ask that UN Troops be assigned to protect the Rangers on their patrols, and protect the Park from ALL threats.
The loss of life - human and non-human - and damage to the environment has become critical. Urgent action is needed. The World respectfully asks for your help.
184 Virunga Rangers have been killed while on duty protecting the Park.
'' In the Democratic Republic of the Congo, tormented by rebel militias, 183 rangers have been killed in just one national park over the past decade.''
http://www.theguardian.com/theobserver/2013/jun/15/poachers-africa-thin-green-line
Fighting the poachers on Africa's thin green line
*
The death toll is now 184 including the murder on Aug 3, 2013 of
Ranger Kasereka Kipako, age 34 RIP
http://www.theguardian.com/theobserver/2013/jun/15/poachers-africa-thin-green-line
*

‘’ Virunga National Park (covering an area of 790,000 ha/ 2 million acres) comprises an outstanding diversity of habitats, ranging from swamps and steppes to the snowfields of Rwenzori at an altitude of over 5,000 m, and from lava plains to the savannahs on the slopes of volcanoes. Mountain gorillas are found in the park, some 20,000 hippopotamuses live in the rivers and birds from Siberia spend the winter there.’’

http://whc.unesco.org/en/list/63
*
‘’ The property has benefited from the status of National Park since 1925. Its management authority is the Congolese Institute for Nature Conservation (ICCN) the body which has lost numerous agents killed on active service. ‘’
‘’ Designated as a World Heritage site in 1979.’’
Inscription Year on the List of World Heritage in Danger: 1994
http://whc.unesco.org/en/danger/
*
‘’ DR Congo is the only country in Africa with five natural sites on the World Heritage List. One by one, these sites were put on the Danger List at the request of the DRC, starting in the mid 90s due to civil war, widespread poaching and deforestation.

Virunga, Garamba, Kahuzi-Biega, Salonga National Parks and the Okapi Wildlife Reserve, are home to a unique range of flora and fauna including the Mountain Gorilla, the Okapi  - a forest giraffe only found in DRC - and the near-extinct Northern White Rhino. The Congo basin forests are also the second largest forest block in the world after the Amazon.
http://www.iucn.org/fr/propos/union/secretariat/bureaux/paco/paco_drc/programme_de_l_uicn_rdc/?6780/1/More-Needed-to-Save-Congos-Natural-Heritage