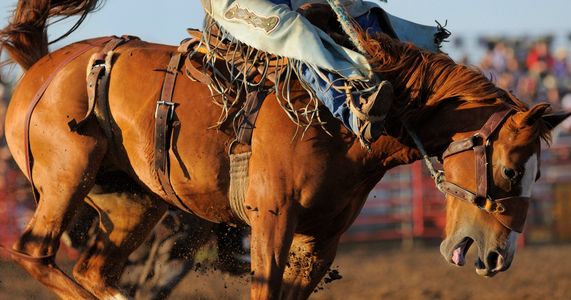 Rodeos across the nation are sold as fun for the whole family, but they often have a dark underbelly of animal abuse. Recent footage of a rodeo held at the Rowell Ranch Rodeo Park in Castro Valley, California, confirms that this event was no different. What kept this rodeo in step with the history of abuse? Horse tazing.

That's right. These horses, who are already under an immense amount of stress, are being electro-shocked when they don't perform the way their riders and handlers want them to. Right now, under California law, the heinous act of tazing a tame, trapped animal is punishable only by a measly $2,000. But in the same state, animal cruelty is a felony, punishable by imprisonment. This discrepancy is leaving vulnerable horses in danger.

Horrendous footage captured by activists shows horses at the rodeo park in the pre-show chute, rider already strapped to their backs, refusing to move. This is most likely a sign of pain or exhaustion, but their handlers don't care - the show must go on. The men hit the horses in the head and stab them with spurs. When that isn't enough, they sneakily hold a shocker on a horse's neck, which applies thousands of volts of static electricity to the poor, trapped animal.

The horse, frightened and in pain, bucks and twists unnaturally, putting on the desired show. These panicked movements can cause further injury to the horse - collapses, broken backs, and broken legs are among the reported traumas.

The insulting fine of $2,000 was charged to the producer of the rodeo, Flying U Rodeo Company. But a representative of the production house said there was no record of the fine being received, or paid. This is unacceptable! The parties involved should be treated according to their offense: egregious animal cruelty.

Enough is enough. If the only punishment for animal abuse is a $2,000 fine which may or may not be paid, there will be no animal in California safe from violence. Sign the petition and demand that California State Legislature amend California Penal Code Section 597 to make the electro-shock of horses an act of animal cruelty, and charge those responsible accordingly!
Sign Petition
SHAREShare this petition with friends!TWEETEMAILEMBED
Sign Petition
See more petitions:
You have JavaScript disabled. Without it, our site might not function properly.