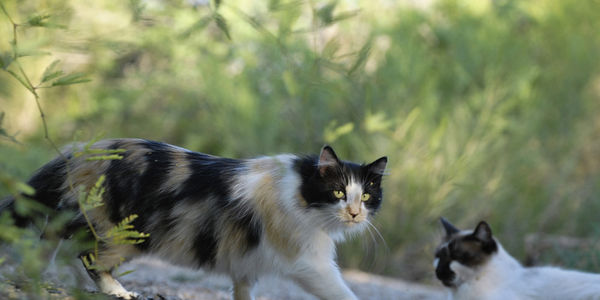 Put a Stop to Australia's Plan to Kill Feral Cats

Australia will begin researching a virus to kill feral cats. The government has endorsed an eradication plan, and research has began in finding a “safe and targeted form of biological control.” But how "safe" is this virus, when pet owners are warned that they must immunize their housecats, because the virus doesn't discriminate between feral and domestic. ALL cats would be at risk if this deadly virus is released.

Previous attempts at eradicating feral cats on islands has proven nothing but costly, ineffective, and in most cases, counterproductive. When feral cats are removed from island ecosystems (usually to protect birds), rodents and other small mammals (raccoons, skunks, opossums) fill the niche and prey on the native bird populations at the same rate or at an increased rate than did the cats. Removing feral cats only exacerbates the existing problem and creates new problems.

It's estimated that every minute, 11 football fields of forest are cleared. Forests that provide food and shelter for birds and wildlife; forests that are home to billions of species of animals and plants. Forests that filter out toxic chemicals in the air and pollution in the water. Human development is destroying crucial habitat that is necessary for wildlife to live and thrive. Humans are responsible for declining populations of birds and wildlife, NOT cats.

Your support of a national killing campaign of Australia's feral cats in an attempt to protect birds and other wildlife is not only misguided but this plan is also irresponsible and unfeasible. History has shown that eradication attempts are ineffective, costly, and in most cases, counterproductive. Lethal management practices are inhumane and cruel; no animal deserves to die a slow and painful death by being infected with a virus or by ingesting poisoned bait.

While I greatly share your concern for the decline in some bird populations, killing cats is NOT the answer. Human activity is responsible for the world's declining wildlife. According to the 2013 State of the World's Birds report, the primary cause of declining bird populations is due to habitat loss, agricultural expansion, climate change, and pollution.(1) Therefore, your efforts should focus on these big-picture items, which are gravely impacting the future of birds.

Attempting to eradicate cats is a futile endeavor and will cause catastrophic consequences on local ecosystems. Humans cannot control animal species without negatively impacting the surrounding environment. For example, after cats were eradicated from Macquarie Island, the rat population exploded, which to this day is decimating the ground-nesting bird populations. Rabbits, too, increased in population and began destroying the island’s vegetation, leaving the native penguin population more susceptible to predators. Scientists are now working to eradicate the rats, mice, and rabbits.(2,3) BirdLife Australia head of conservation Samantha Vine told The Sydney Herald that rats are already contributing to the decline in Australia's bird populations.(4) Certainly killing all feral cats will guarantee rat populations to explode, further intensifying rat predation on birds.

And such attempts at eradication take several years, which never result in completely killing all targeted individuals, and they end up costing taxpayers billions of dollars. It took over 15 years and cost $17 million to eradicate most of the 2,500 cats on Macquarie Island (which is only 21 miles long and 3 miles wide), with another $24 million allocated to eradicating the rats and rabbits over the next seven years.(5) Attempting to eradicate an entire population of feral cats on a continent, with far more variables and unpredictable outcomes would be nothing less of ineffective and unsuccessful.

It makes no sense to kill one species in order to save another, nor is it morally acceptable. All sentient life deserves respect and freedom from cruel and inhumane treatment. If the Australian government legitimately wants to reduce feral cat populations, you must embrace Trap-Neuter-Return (TNR) programs, which provide a long-term solution.

Years of research have shown that TNR is highly effective at managing feral cat populations because it stops the breeding cycle. The Veterinary Journal recently published a study that showed implementing a spay/neuter program for community cats in a targeted area decreased the local animal control impound rate of cats by 70 percent, while also decreasing the shelter's euthanasia rate of cats by 95 percent.(6)

Every day more and more sterilization programs, such as TNR, are being implemented for feral cats across Australia and around the world. Compassionate societies are embracing this humane, non-lethal method of managing community cats, because it is effective, less-costly, and it preserves the sanctity of innocent life.

The public no longer supports the use of lethal animal management practices. Enclosed are the signatures of nearly 5,000 individuals who have signed our petition AGAINST your plan to kill feral cats, with thousands more signatures being delivered to Ambassador Kim Beazley in Washington, DC.

Please STOP Australia's cruel and inhumane plan to eradicate feral cats, and instead, partner with rescue organizations to implement TNR programs that are proven to reduce feral cat populations, cut costs, and preserve life. In order to instill a more compassionate ethic towards the earth and effectively protect ALL its inhabitants, humane, non-lethal animal management practices should be advocated.