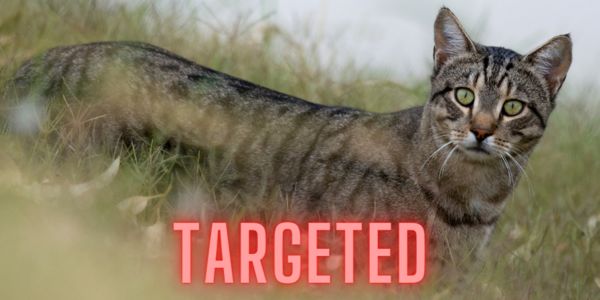 Help Us Stop the Inhumane Killing of Cats on Kangaroo Island

The Australian government has been working to eradicate cats from Kangaroo Island through lethal methods since 2016. The government claims that cat predation is seriously depleting the population of native species. They have been singing this same tune about species conservation throughout Australia for many years, and their solution is always killing cats. Following the 2019-2020 wildfires on Kangaroo Island, which decimated the populations of many species there, the government and environmental groups such as Kangaroo Island Land for Wildlife are now persecuting cats with even more fervor, panicked by their belief that feral cats will finish off the surviving native animals.

These organizations are introducing new technology to cull cats, with no regard for humaneness. One specialized machine called a Felixer trap uses artificial intelligence to identify passing cats by their size, shape, and speed and then spray the cats with poison. The cats ingest the poison when they groom themselves – supposedly enough to kill them. There is of course the potential for a cat to ingest only enough toxin to make them seriously ill, in which case they would suffer for a prolonged period of time. Strangely, the people condoning and setting Felix traps are not worried about that. Their concern seems to be only for the welfare of -some- animals.

If the cruelty of killing large numbers of cats isn't upsetting enough, the plan is entirely misguided! Every previous attempt at culling cats on islands has resulted in rats and mice no longer having a predator to control them and then overrunning the islands. Then THESE animals have to be poisoned. For example, Marion Island killed all their cats in the 1990s and since then mice have taken over without cats to control their populations and the mice are preying on the island's chicks.

The ACR website offers more information and examples of this at http://www.saveacat.org/cats-and-wildlife.html.

Culling is not even a practical solution. There are an estimated 1,610 cats on the island. During the time it takes to kill all of them, more will be born, and then more. Kittens are able to become pregnant by four to five months of age, and cats have short gestation periods so there is no way to overtake their numbers by killing off individuals. The campaign of killing could go on forever. There really is no upside to the plan; TNR will be every bit as effective in controlling the feral cat population there in the next few years, and much more effective in the long term.

Lack of reason aside, if one is determined to believe cats endanger the existence of native species on Kangaroo Island, or anywhere else in Australia, one really should place the blame where it is due. In the early 1800s, humans purposefully brought cats to the country, starting in Sydney, in order to control rats. People introduced Felis catus to Australia, yet the cats are the ones being punished.

We want the unjustified killing of cats on Kangaroo Island to end!

Alley Cat Rescue is going to send this message to Kangaroo Island Council CEO, Greg Georgopoulos, and we want to make it LOUD. Please sign our petition condemning the cat culling plan. The more people around the world who oppose it, the more likely the Council is to pay attention!