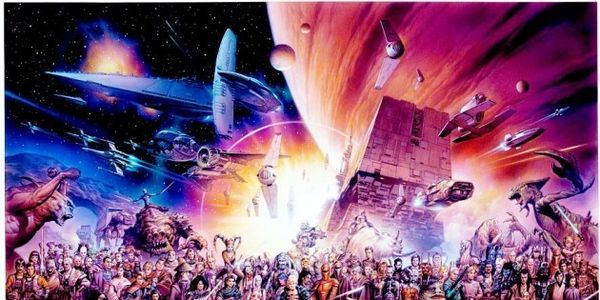 A Force Call for the Star Wars Expanded Universe

Hi everybody, it's May the 4th, and on this day, commonly taken as the Star Wars Day by the fans community, a couple of friends feel a disturbance in the Force. It is a day when fans like us usually quote famous sentences, share good SW medias with friends, and why not, switch on their light saber replicas to make some moves, just a fun way to celebrate his passion.

But today we don't feel like we want to celebrate.

For the people who aren't already aware, Lucasfilm and Disney announced last week the end of the Expanded SW Universe. This Universe contains all the books, comic books, video-games, board-games and other medias related to Star Wars except the original movies, and the animated Clone Wars Saga. Which represents hundreds of different stories connected to each other and to the movies, binding adventures which takes place before, during, and after them. Making the characters that everyone knows deeper and creating new ones, as well as new conflicts, new species, new planets. The entire map of the Galaxy is built over the EU data. It is a complete chronological History loved by several generations of fans. Maybe the biggest background ever created for a single tale.

The underline reason behind this decision is the difficulty for the team in charge of the new movie to make the incoming trilogy fit in the Expanded Universe. A new "Unified Universe" will start to rise slowly over the ashes of the previous one, eventually becoming as canon as the movies in the process.

But that's not what made us sad. When we discovered the announcement, we thought "There must be something to do, the fans are too many to let this happen without any reaction." We looked for some protests or petitions where we could add our voices. But we found nothing. The reactions of anger and sadness were there, as many as we suspected. But only individual despair and resignation. People already gave up, and the most used "consoling" reaction was: "It still hurts, but we saw it coming" …

That's what made us sad, and motivated us to make this call.

There will be people who think that’s just an overreaction from a bunch of nerds with a weird passion : let’s be honest to ourselves, it probably is. There’s much bigger problems in the world, some might add. You have the right to think so, but we think there is something critical at work here. Dozens of thousands of persons worked on the EU, to make it coherent, interesting, beautiful, and that is not an overstatement. Every single person who ever had a hand on the creation of a novel, comic, game, video game, website, encyclopedia, fanfiction and mere drawings, is taking a slap to his face right now. Their work, their art, is about to be simply erased.

You can be impervious to a famous painting, but it doesn't change the fact that if somebody wants to paint over it, it becomes a more general issue. It is like writing a sequel to a story, bringing back some characters who died in the first one. Or remaking your favorite TV show before its end, or reinventing all the rules of your favorite sport… Star Wars did take a significant place in our culture over the years, generations have and will grow up with it. It inspired many authors in many productions. Some recognized SF authors participated to the expansion of this Universe, and some became famous in the whole world thanks to it. We are all losing something in that decision.

We know the EU has never been officially canon like the films, but it started with the first book of A New Hope, edited by Georges Lucas, even before the movie was released. Lucas gave his benediction to let Lucasfilm and authors develop his Universe. It became a bit like his grand-children. If the movies are still the most important part in Star Wars (and we could already have an argument over this point with a bunch of people), we can't take back the importance of the EU. Its few incoherencies are nearly a miracle considering its size. Until now, there was essentially one Star Wars Universe, containing the canon movies and Clone Wars, and the Expanded Universe. From now there will be two… the previous Expanded Universe, relabelled Legend, and the new Unified one, containing the films with the new stories. How many time will we see beloved known EU characters appearing with a whole different story than the original, but considered canon? Because that may be the worst part: the new stories are supposed to be originals, but they still may pick up some ideas, characters, or important facts from the EU as inspiration. This is a double standard as we never saw one. We are missing the chance to have a whole unique and coherent Universe with that awful decision.

To Lucasfilm and Disney: you made the right choice by starting a new original story. And the difficulty to make it fit in the EU is perfectly understandable; but it WAS possible. We believe if you did involve some of the EU authors in the creating process, they would have found a timeslot to make a great story. As they always did.

At first, if you started this new trilogy, it is thanks to the success of this background, not only the movies. It is a direct answer to the demand of thousands of fans who followed the SW adventures through the books and the games. The EU contributed largely to the success that made you launch the production of new movies. Not making them a part of it isn’t just a total contradiction; it is a deception for a big part of the public you wanted to target. We personally follow the SW movies since our childhood, but we were only liking it. It is the EU, its roots, core and branches, that have made us really love the whole Star Wars Universe. When they are just the top of the iceberg, we can't imagine movies that are not in the continuity of the stories we know since we are young. We don't want to see that, and sadly, we will not go see that, even if an Episode VII is a dream we shared with lot of people. You may gain new fans in the process, but we are sure you will lose some like us too, where there was possibility to keep both. Like we said, we are all losing something.

To the fans who have the same passion for the EU. We have followed these awesome adventures during decades. We travelled throught that entire galaxy, adopted its new characters. We built websites and encyclopedias about them, made inspired drawings, videos, cosplays and even more stories. We could mention way more than Yoda or Palpatine in the recurrent debate of who is the most powerful user of the force. We have to show how many we are to disagree with this decision. We have to make a stand. The Expanded Universe can't end that easily, and our love for it is just a part of the reason. It doesn't matter if we saw it coming, or still have hope in the next trilogy. It doesn't matter if it's too late or useless. We owe a huge reaction to this huge Expanded Universe and the pleasure it gave to us. To the hundreds of authors, illustrators, editors, programmers, and the countless other jobs who built it. If it is not to save it, at least to honor it, and to say thank you one last time.

So this is a Force Call to everyone who doesn't want to see the Star Wars Expanded Universe disappear. If there is enough people behind us, it may not be too late to help it.

May the force be with us all.

Just some fans among the others.