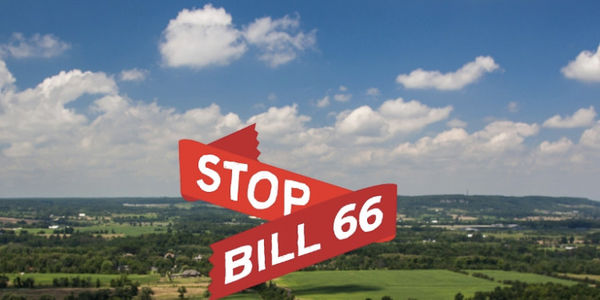 UPDATE: Ontario has announced that it will withdraw Schedule 10 from Bill 66. This is in response to the tremendous opposition from municipalities, organizations and concerned individuals. We must not be complacent however in celebrating our success with Schedule 10. Other announcements have been made including changes to the Greater Golden Horseshoe Growth Plan that continue to pose a threat to farmland, promote lower density development and sprawl.

The "Open for Business" Restoring Ontario's Competitiveness Act, 2018 (Bill 66) introduced in December is intended to 'cut Red Tape' and increase development in order to create jobs. If passed, this legislation would trump critical environmental protections for land, water and wildlife. Bill 66 Schedule 5 repeals the Toxins Reduction Act, 2009 while Schedule 10 would allow municipalities to create "Open-For-Business Zoning By-Zaws" to circumvent planning requirements and restrictions under numerous provincial laws, plans and policies, including the Clean Water Act without public notice or consultation. Under the guise of cutting red tape, Schedule 10 would line the pockets of big business at the expense of our health, our natural heritage and our environmental rights.

Ontario cities and towns already have enough land designated for new businesses and houses within their boundaries. Development should take place on the land that has already been designated for that purpose.

OFB ZBL approvals bypass the rules that govern zoning by-laws, environmental protections and land use controls that protect water sources and public health, such as The Clean Water Act.  Learn more: watch the @BetterBrant video Water. Neighbours and local residents will not be notified or consulted, nor will they be able to appeal a OFB ZBL.

Opposition to Bill 66 is growing! Based on its review of Bill 66 Schedule 10, the Canadian Environmental Law Association (CELA) issued a recommendation that Schedule 10 be immediately abandoned or withdrawn by the Ontario government. They assert that the Clean Water Act - put in place after the Walkerton tragedy - is not 'red tape, it protects public health.  Many municipalities, including Hamilton, Burlington, Milton, Oakville, Guelph and Waterloo have issued public statements indicating they oppose Bill 66 as it is written. Farm organizations point out that agriculture is a major economic driver in Ontario, farmland needs to be protected, thus the Ontario Federation of Agriculture and the National Farmers Union-Ontario are opposed to Bill 66. Dozens of environmental organizations such as Sustainable Brant, Environment Hamilton, Environmental Defence, GREN, Simcoe County Greenbelt Association to name just a few are working tirelessly to raise awareness and oppose Bill 66.

By signing this petition you add your voice to the objections of these organizations and municipalities that already oppose Bill 66.