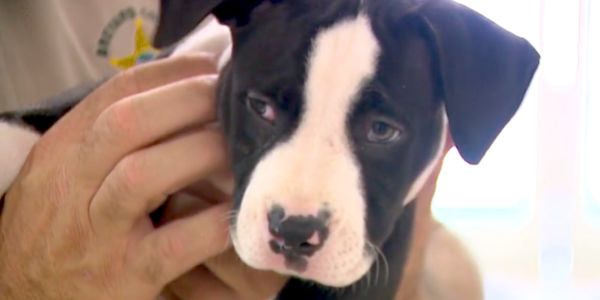 Walking through the parking lot outside a mall in Florida, someone noticed a disturbing sight: a 10-week-old puppy locked inside a hot car, panting and SCREAMING from being broiled alive.

Luckily, the benevolent stranger immediately called local animal control, who sent down an officer to rescue the baby animal. What he found was extremely alarming. Whoever had left the puppy inside the car had kept all four windows rolled up and completely shut, and the inside temperature had already skyrocketed to 100 degrees Fahrenheit.

Sign the petition to urge Florida state officials to launch a public awareness campaign in concert with vets, shelters, and pet stores to protect dogs from burning to death in cars!

As the animal control officer recounts: "The puppy was laying on the floor behind the passenger seat, screaming in pain and barely moving."

It took another full 30 minutes after that for the puppy's owners to leave the mall and arrive back at the car. Their animal would have long since been dead by then.

The couple has since been arrested and charged with animal cruelty. But more dogs are out there being abandoned in baking hot cars, left to die. The animal control officer stated that such rescues are a regular occurance in Florida. But most people who leave animals in cars aren't intentionally trying to be malicious. They just hope and assume it will all be alright — but it won't.

In fact, it only takes 10 minutes for the temperatures inside parked cars to climb by 20 degrees. In 20 minutes, the heat can increase as much as 30 degrees. By one hour, the interior temperature can climb 40 degrees. That means even when it's a little bit chilly outside — say, 65 degrees — a car's inside temperature can hit 105 degrees Fahrenheit in just one brief hour. Even cracking the windows a little bit open isn't barely enough to stop that heat escalation.

Clearly something needs to be done to educate dog owners and prevent this kind of animal torment from ever happening again.

Tell Florida state officials to make sure dog owners are educated about the dangers of parked cars! All animal shelters, dog sellers, and veterinarians must certify that they have educated each dog owner they work with about how to keep dogs safe from broiling to death in cars.
Sign Petition
SHAREShare With FriendsTWEETEMAILEMBED
Sign Petition
See more petitions:
You have JavaScript disabled. Without it, our site might not function properly.