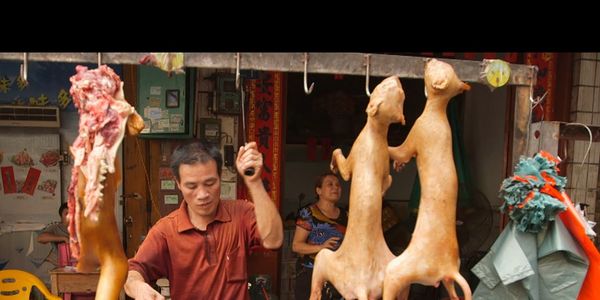 Stop the torture and killing of cats and dogs in China.

Each year on June 21st, for the annual Chinese Yulin Summer Solstice festival, thousands of dogs are brutally tortured and then beat to death. This grotesque and inhumane event is responsible for tarnishing China's international reputation, and for propagating extreme and unnecessary cruelty to animals, and unhygienic food for the Chinese people.

Dogs and cats are not food. In Asia dogs and cats are considered as live stock aminals. Dogs are skinned alive, torn apart, smashed with hammers and cut with chainsaws and even boiled and set on fire, alive. A lot of people at the festival also engage in public torturing of these poor souls by dragging and running over them with cars. We are calling on Chinese officials to put an end to this barbaric and culturally insignificant festival, where around 10,000 dogs annually - including puppies & pregnant dogs - are skinned alive, boiled alive, disemboweled, dismembered or mutilated when they are still conscious before being beaten to death with metal rods in slaughterhouses. Dog restaurant owners claim that the extreme pain, trauma and fear these dogs experience in the weeks leading up to their death makes the adrenaline-rich dog meat tastier, and that it also brings good fortune at the summer solstice.

Many of the dogs who are killed for the annual Yulin festival are either pets who are stolen and killed still wearing their collars, or homeless dogs rounded up for the festival. As many of these animals have been vaccinated as pets, there is a high health risk associated with consuming their meat. According to the World Health Organization, the Chinese dog meat trade has been linked to cases of trichinellosis, rabies and cholera. Eating stolen pets and homeless dogs at Yulin, with no clue as to their origin or health, is worse than scavenging roadkill for unsuspecting Chinese people. While eating dog meat has ancient roots in many Asian cultures, the Yulin's has absolutely no historical or cultural significance. According to Time Magazine, the event only started in the 1990's to boost dog restaurant profits, as most young Chinese do not consume dog meat, and the Yulin festival isn't even culturally considered to be 'official'.

Dogs and cats don't deserved to be served on a dinner plate. They are man's best friend. They are loving family members. Please stand with I Stand With My Pack in calling for an end to the cruel and barbaric Yulin festival by signing our petition, and also in urging China to not allow their international reputation to be one of shameful cruelty and suffering, and to call on China to join the vast majority of developed nations that have formed basic animal rights laws.

End dog and cat consumption. End the dog and cat meat trade. End the barbaric toutoure of these poor creatures. Please take 2 minutes to sign this petition and help change history for the better!

Share please, so we can get as many signatures as possible.

Care2
Stop the torture and killing of cats and dogs in China.
SHARETWEET