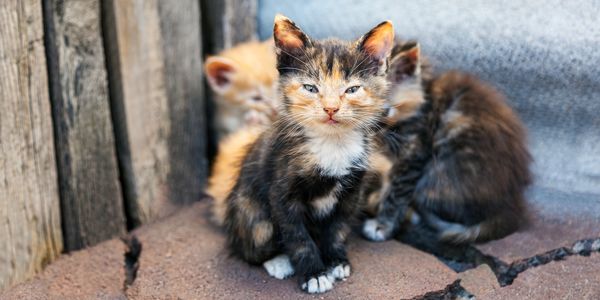 Stray cats in Greece are suffering because there are too many to care for!

"Kitten season." It sounds adorable, but it's actually a huge source of animal suffering and community strain. Also known as feline breeding season, it takes place during the warm months in a country or region when cats are in heat and breed freely. In places where there is a large stray cat population, like Greece, this breeding season can be explosive in terms of population since the gestation period for cats is a mere two months -- meaning one female cat can get pregnant many times every season.

When there are too many strays for a community to handle, there is no way to ensure welfare for each and every poor cat. They go hungry. They go without veterinary care. They are vulnerable to attacks, accidents, and abuse. In Greece, which has one of the largest stray populations of cats, this suffering is everywhere.

Sign the petition imploring the Hellenic Parliament, aka Greece's Parliament, to vote yes on the proposed bill that would make spaying and neutering owned cats and dogs mandatory!

To avoid unwanted cat and dog pregnancies, and to crack down on amateur, irresponsible, or downright abusive breeders, the legislation would require every pet owner to neuter or spay their companion animal. Owners would still be allowed to have one litter per pet, and a reproduction license would be available for approved breeders and owners.

Accidental pregnancies of even pet cats add to the stray population, as owners dump kittens on the street or deliver boxes of the babies to shelters when they don't have the time or finances to care for them. Nonprofits in Greece are already buckling under the pressure of feeding and caring for stray cat populations. And amateur breeding is riddled with cruelty; a lack of regulation allows "backyard" breeders who are just after a buck to keep their animals in tight, filthy cages, deny them proper nutrition or veterinary care, and treat them like products instead of living, breathing, feeling creatures.

The bill is a slam dunk for animal welfare across the board, even beyond compulsory neutering. It includes a ban on dog and cat sales in pet stores, would make it illegal to advertise litter sales, and even puts a limit on the number of times licensed breeders can breed one animal -- just six times for its whole life. Without regulations like these, mama cats and dogs are often bred within an inch of their life, forced to be pregnant with litter after litter without any breaks or proper medical care. And if it became law, this bill would also create stricter animal abuse laws and punishments, and even outlaw adoption fees so that adopting a pet instead of shopping for one would be highly encouraged!

The proposed bill is built around five core animal rights:

"Freedom from hunger and thirst, freedom from unnecessary suffering and strain, freedom from pain, injury and illness, freedom from fear and anxiety, and the freedom to express normal behaviors in appropriate living conditions."

Mandatory neutering of pet animals is a clear first step towards affording all the cats and dogs in Greece a chance at these freedoms. Join us in asking the Hellenic Parliament to vote yes on this proposed bill that is a sweeping win for animal welfare!

Care2
Stray cats in Greece are suffering because there are too many to care for!
SHARETWEET