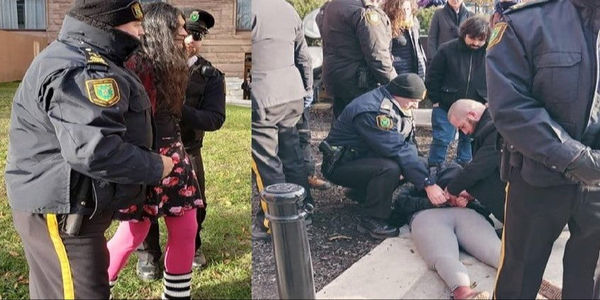 Update: The 519 has dropped support for TTA, and is promising to release a statement addressing police violence soon... SHC is still not responding though

Update: The SHC has also dropped support for TTA, however they didn't say anything about releasing a statement about police violence, and made vague reference to future sponsorships.... the main objective here is accomplished, but we'll have to follow up on this later

Update: We have a new petition that builds on this one. It asks politicians to separate the flag-raising (which TTA puts on) from the TDoR Proclamation (put on by the government). This way we can demand that politicians remain neutral by not attending the flag-raisings, which we're hoping will dampen TTA's legitimacy.

Two trans people were violently arrested at a co-opted Trans Day of Remembrance (TDoR) event in Toronto in 2018. One of the protesters was knocked unconscious, and suffered from a concussion and cracked wrists.

This should not need to be said, but violence against trans people is completely unacceptable, and especially by an organization that is purporting to serve trans people. The fact that this has been going on at TDoR for 5 years is horrendous and ludicrous.

This racist and transmisogynist event is held by the TTA, a relatively right-leaning group run by a single white trans man (Boyd Kodak) without any community engagement from the broader trans community. The group falsely claims to be an umbrella group for all trans people, as it does not engage with the broader community at all.  Its only action is raising a flag on TDoR. The TTA has been co-opting the flag-raising mainly to show leadership in the trans community, and then use that status to push for a right-wing and racist agenda that erases the history and politics of IBPOC, lower class, and homeless trans people.

This event was mainly sponsored by the Sherbourne Health Centre, the 519 Community Centre, and supported by a local politician Kristyn Wong-Tam, who is less than favorable amongst much of the marginalized and racialized queer and trans community.

QTCASE is now building a campaign to strip TTA of its sponsors and support, and hold its core organizers and supporters accountable. After engaging in a dialogue with the 519, the 519 has confirmed that they are dropping sponsorship of the TTA this year, and have promised to release a statement on the police violence soon. However, the Sherbourne Health Centre is not responding. We're asking folks for more signatures and escalating tactics like protests to hold the SHC accountable.

We recognize that there are many other issues that need to be addressed at SHC and the 519. This petition is focused on the violence that happened at TDoR by the TTA. We intend to address issues of abuse, accountability, and the co-optation and the breakdown of decision-making, support and educational resources at the 519 and other organizations at future actions, events, through petitions, etc.

QTCASE (qtcase.com) is a radical queer and trans group that prioritizes the issues of IBPOC, lower class and homeless trans people.