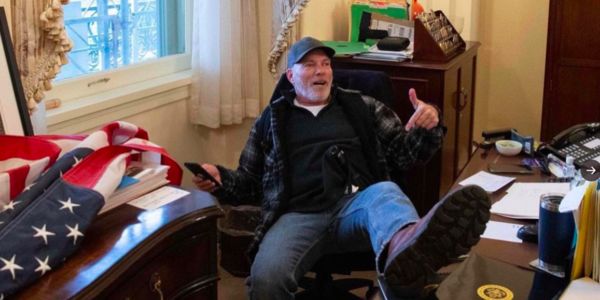 *Photo of terrorist vandalizing and leaving a written threat to Speaker Pelosi in her office during the capitol siege.

On Wednesday, January 6th, 2021, an angry mob of domestic terrorists (all Trump supporters) stormed the U.S. capitol building and occupied it for hours. Their intention was to stop the normally very boring congressional certification of election results. These angry, hateful people were allowed to do this. Now, at 9 PM EST on Wednesday, only 13 arrests have been reported. The people who broke windows, trashed the building, stole podiums, left written threats and more were virtually all allowed to simply walk out of the building freely.

Sign on if you'd like to see every single person who stormed the U.S. Capitol to be arrested, charged and indicted for their crimes.

The Capitol building is supposed to be one of the most secure in the world. And in the past, actual peaceful protestors have been arrested for doing far less than what we saw on January 6th. So why is it that an angry mob of violent insurrectionists were able to occupy the building for several hours and then literally walk away?

In fact, at least one of the leaders who made it into Speaker Pelosi's office and live streamed from there is still at large as of 9 PM EST on January 6th. Worse yet, that person is a neo nazi and holocaust denier, a good example of the kind of people who were a part of this attack.

Many say the reason the building was invaded had to do with law enforcement being unprepared. But why weren't they prepared? The far right white supremacists who did this have been publicly planning this for weeks, with Trump in the lead. It was so well planned, they had actual clothing merchandise which read "MAGA Civil War, January 6th, 2021." So it is extremely suspicious that law enforcement was not ready for what they knew was coming. Worse yet, that it took over 3 hours for law enforcement to regain control of the building.

Here are a few things that reportedly happened, many of them with video and photo evidence proof that should have meant immediate arrest for the perpetrators. A woman was trying to break into the building and she was shot in the neck and killed. People scaled the walls of the building and replaced American flags with Trump flags. Police opened a barricade to allow rioters into the area. At least one police person took time to take a selfie with the insurrectionists inside the building. A man invaded Speaker Pelosi's office, trashed it and left a written threat and stole her mail. Pipe bombs were found nearby. They broke windows and doors, they waived Trump flags and Confederate flags, which have become synonymous. Rioters stole media equipment and destroyed, including turning cords into a noose and hanging them from a tree. A state legislator from West Virginia was among the rioters. They bore QAnon, Proud Boys, Neo Nazi, and other white supremacist insignias. It is all caught on tape, almost none of those people covered their faces. So why are they still walking free?

D.C. Mayor Bowser put a curfew in effect at 6 PM and yet there were still thousands of people in the streets well into the night and cops did nothing but gently ask them to leave. We know police know how to do mass arrests, we know they know how to deploy chemical and non lethal weapons for crowd dispersal, we know because they did it all summer in 2020. So why in the world would they hold back now when this group of terrorists stormed the capitol?

Sign now to demand the traitors who perpetrated this attack are arrested immediately, charged and indicted for their crimes against this country and democracy.

And never forget that when President-Elect Biden called on Trump to call off his violent mob of insurrectionists, Trump instead told them "You're very special, we love you."