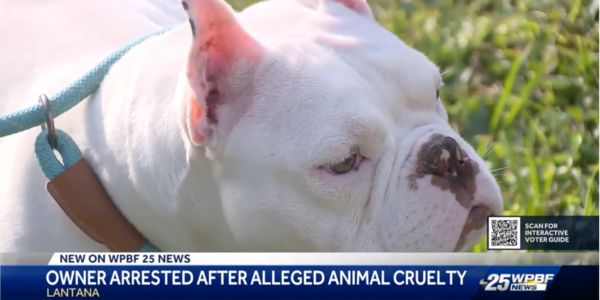 This Man Dragged a French Bulldog Behind a Moving Truck. Justice for Blanca!

Yet another tragic instance of animal abuse was reported in Florida, when a man tied a dog to a truck using her leash and proceeded to drive with the poor animal attached to the vehicle, dragging her across the rough pavement and leading to multiple painful injuries. The dog, named Blanca, managed to survive after treatment. But the pup still suffered greatly, and could have easily died in the incident – which is exactly why this man must never be able to get his hands on an animal again.

Sign now to demand this man receive a lifetime ban on animal ownership!

The person who reported the incident to the sheriff's department described a harrowing scene, where a dog was dragged by its leash on a local roadway behind a large truck. Other drivers were repeatedly honking their horn at him, trying to get his attention, to no avail. Finally, the man stopped the vehicle and literally threw the dog into the bed of the truck before driving off. To the bystanders, this much was clear: that man did not care at all about the well-being of this poor animal.

To make matters even worse, after the abuse the man did not even take the sweet frenchie to the vet, claiming that she did not need immediate care. But when Blanca was turned over to a vet after the man's arrest, it was clear she was in pain, and desperately needed care for her wounds, which were on the verge of infection.

There is one simple step that local authorities can take to guarantee this man never commits this type of heinous crime again: give him a lifetime ban on animal ownership. We must protect the animals of Palm Beach County from such horrific abuse! Sign the petition now if you agree!

Care2
This Man Dragged a French Bulldog Behind a Moving Truck. Justice for Blanca!
SHARETWEET